Routemaster – Theatre of the Motor (SFO Mix) (2000) and Asphalto – An Aria for 13 Demolition Derby Cars, Girls & Gas Stations (1998) already make the head spin. Eyes are bulging as if you had swilled a gallon of heavy espresso in five minutes to survive the last 150 miles of the speed trip between nations before the night falls – in fact the limits of tolerance have already been broken, nothing works anymore, you should stop and sleep as long as it takes to recover, but you just go on with the last of your strength, you force your body to go on, and the spirit should be pulled along, everything must work, even if it crushed your heart. And then, just before midnight, when the double serving of cars and eternity have already been consumed, then you get 1 + Plus 1 + Plus 1 – Sympathy for the Decay (2012), Ilppo Pohjola’s Death Trip(tych). And you realise that there is life after death, and there is nothing comforting about it.

1 + Plus 1 + Plus 1 – Sympathy for the Decay gives death a cinematic form it has never had before. The film goes on and on, and especially the last part, ‘Split Screen Stiff’ – the film must be viewed as a composition – seems never to end. The rhythms of the first two parts, ‘Derby Chill Out’ and ‘Bacteroid’, prepare the viewer for something totally different: you expect the work to continue perhaps +/– ten minutes, not forty; after the two lyrical in extremis first parts that initially drown in concrete things only to return to abstraction, you do not expect a totally disintegrating documentary portrait of a scientist and his workplace which compels us to observe how a man speaking heavily accented English talks about a theme that is alarming, to say the least – crash testing with human cadavers. We are told how the laboratory was under construction in the backwoods of South Germany for decades, the bureaucratic obstacles that had to be overcome, the kind of specialised knowledge that can be gleaned by using dead people in simulated crashes. ‘Derby Chill Out’ already presented us with soulless husks: wrecked cars rusting away in a meadow lined by trees, being consumed by nature and perhaps merging into it; we have already seen snapshots of the decay of all creatures: ‘Bacteroid’ is apparently based on film that Pohjola has exposed to all sorts of things for a long time – chemicals and even natural processes – and the footage seems like shots of a swarm of meteorites that look like pieces of junk. Both contain an extraordinary and perverse fascination: ‘Derby Chill Out’ is a study in fin de siècle morbidezza dominated by synthesizer pathos, ‘Bacteroid’ a technotrance version of arrière-garde science fiction. And what is ‘Split Screen Stiff’? Perhaps an audio-visual vanitas. Pohjola has mangled the video footage of his visit to the cadaver crash test site with every means in his disposal. Chemicals probably play a part here, too, and years have played their tricks on the fragile static of the video images; moreover, they are presented on split screen so that the viewer must always watch in advance what is yet to come. The crash testing plant is jarring in its gloomy decay: a half-open elongated wooden structure that looks more like a shack than a scientific laboratory; while the packaged bodies no longer seem to have any human qualities left in them; the only thing they are good for is as containers for bones that can be crushed harmlessly. That is what we stare at. That is what we listen to. It makes us think. This is the 20th century in front of us, bare and banal. Everything preserved in the digital media of these decades, into the indifferent coldness of which our gaze slithers. Into the amber of zeroes and ones.

After seeing 1 + Plus 1 + Plus 1 – Sympathy for the Decay, there is once again something deeply disturbing about death. And that is good in a society which has perhaps become a bit too complacent in its consciousness of the transitoriness of all things. 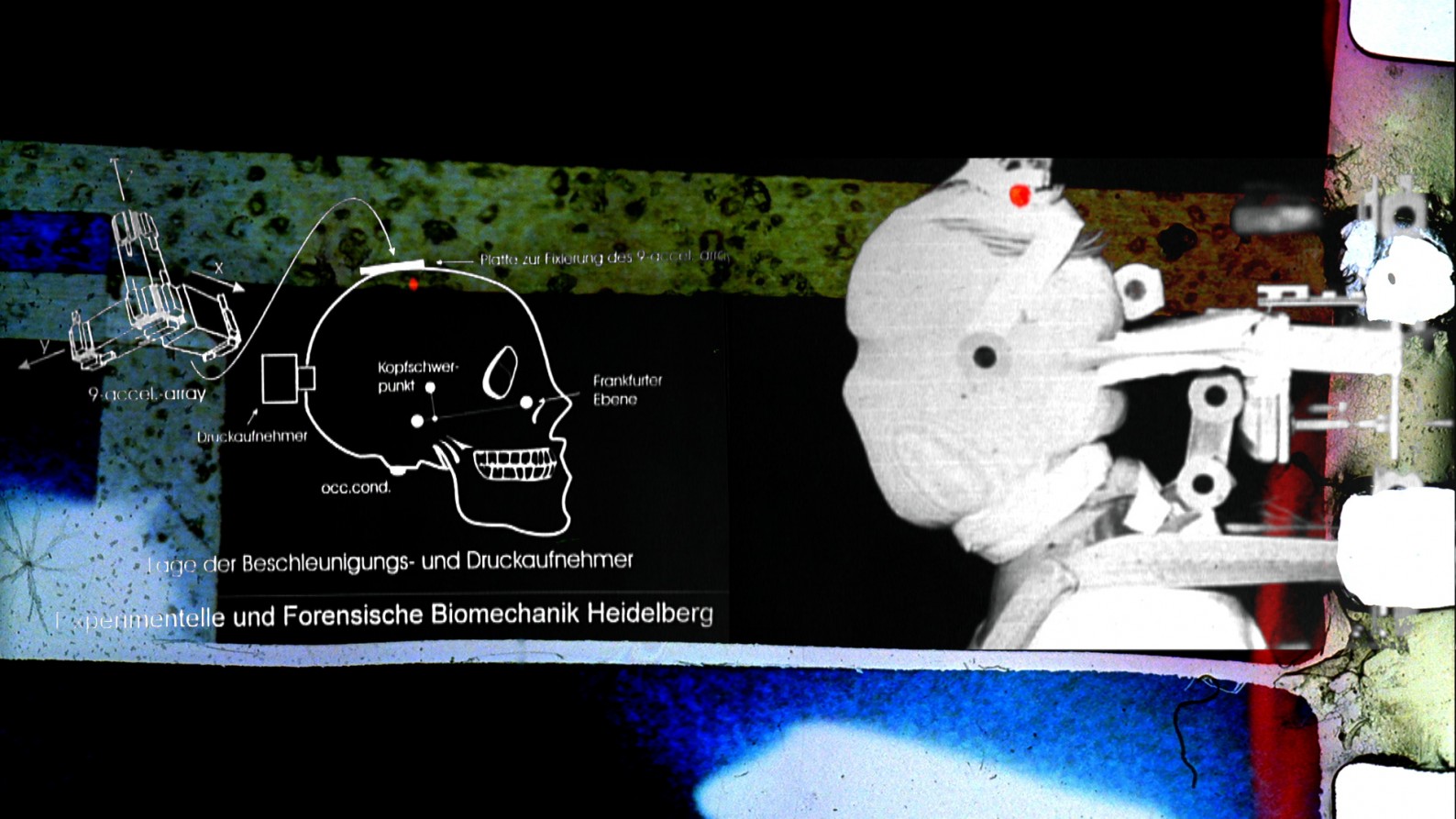