HORIZONTAL is a six-channel moving image work of a living spruce tree. The idea of the work is to show the tree in its entirety, as far as possible retaining its natural size and shape. Because a life-size tree does not fit in a standard-sized human space, the tree is presented horizontally in the form of successive projected images. The work is a portrait of the tree. It is a record of its existence as a living organism, or perhaps more to the point, a presentation of the difficulty of perceiving and recording a spruce tree with the methods of visual documentation invented by humans.

Any attempt to show a fully-grown spruce or some other tall tree using the moving image is bound to run into difficulties. The horizontal film frame cannot show the entire tree in one picture. If one uses a wide-angle lens, the tree appears distorted, and is still too large to fit in one picture. Stepping back to allow the entire tree to appear inside the frame makes the picture no longer a portrait of a tree, but a landscape in which the tree is but one element. When the subject of a work is a spruce tree, the situation inevitably differs from ordinary filming. This happens both in terms of the mechanics and the purpose of filming as well as in the role of the subject and its relationship to its depicted environment. The attempt to film a spruce tree brings the portrayer face to face with the technical apparatus constructed as an extension of the human eye and perception. It also invites us to consider the preconditions of anthropocentric dramaturgy and the valuations it engenders in images and in the order of representation.

We filmed a spruce tree on windy day in early October. The preparations had taken much longer than we had anticipated. Although we had decided to shoot the tree in parts in order to avoid distortion and maximize the amount of visual information, finding a tree of suitable size was difficult. The proportion of the width to the height of the tree was important to allow us to present it using five projectors. Secondly, the background had to be “empty” to give prominence to the tree and its form. The tree also needed to grow in a place where we were able to set up scaffolding or use a scissor lift. We discussed what kind of a camera and lens we should use, and how many would be needed. We knew from experience that using multiple cameras would also multiply the horizon and the background, which would be visible in more than one picture in the final work. We weighed different solutions both for the shooting and for postproduction. It soon became obvious that the more we tried to reproduce in the portrait of what we saw standing next to the tree, and combine that with our ideas of the portrait of the tree, the more the final work would be about the devices and technology of cinematography and us humans as observers. The spruce tree returned us to von Uexküll’s ideas of the coexistence of separate spatial and temporal worlds of different living beings, and to the idea of existence next to and with something else. 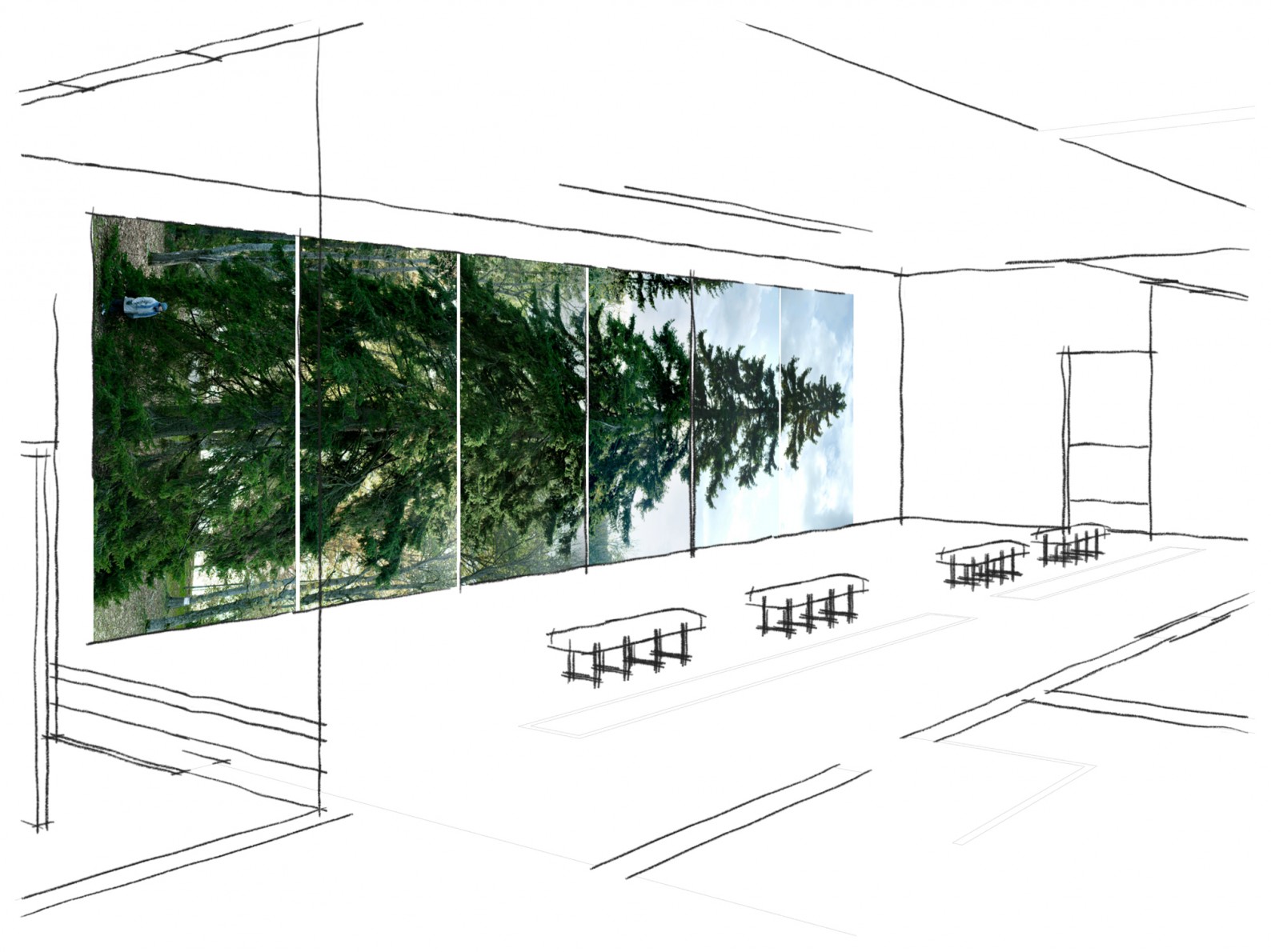