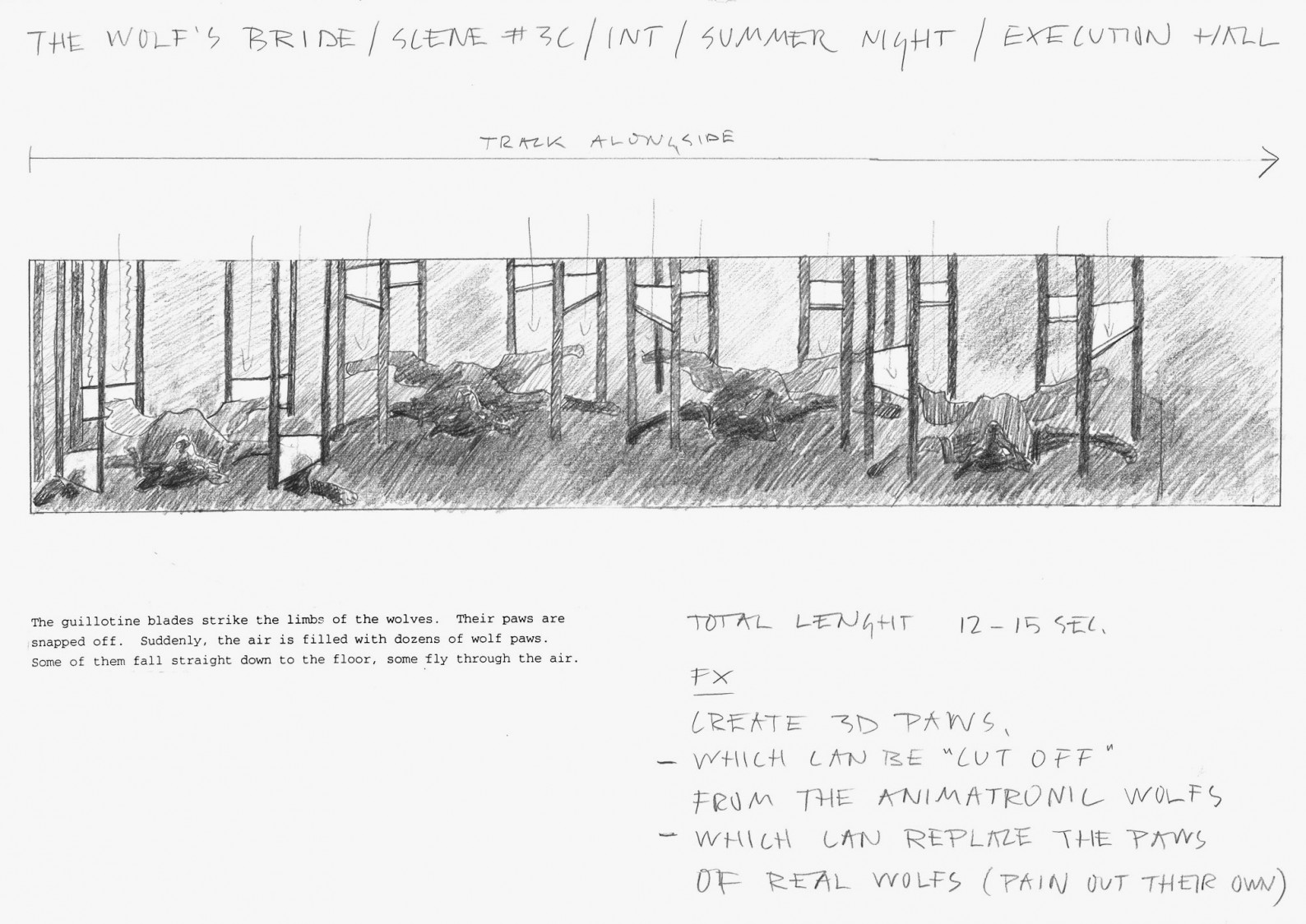 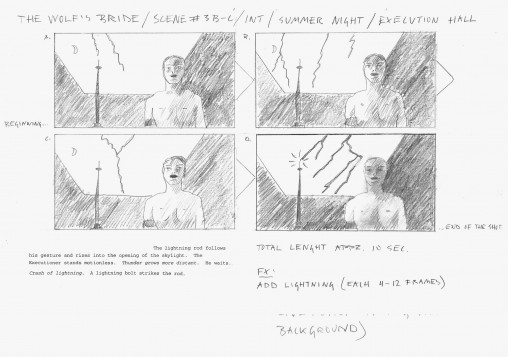 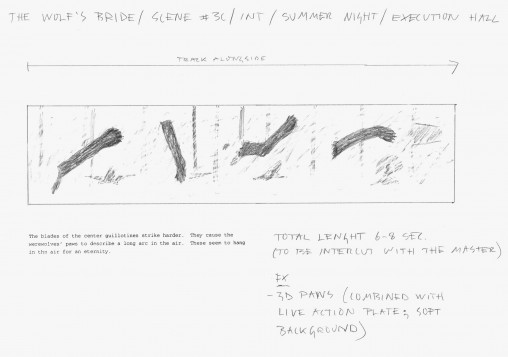 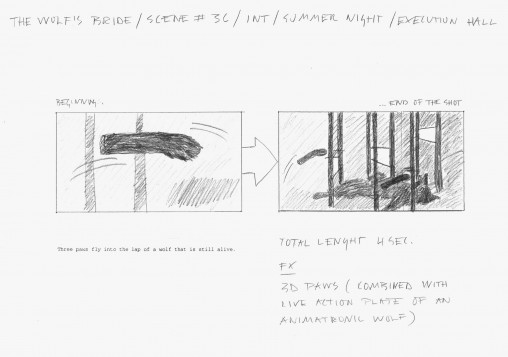 SCENE ONE — INTERIOR / A SUMMER NIGHT / THE EXECUTION HALL

A table.  On the table lies a knife with a curved blade.  It is surrounded by strong shadows.  The sheath of the knife is polished marble, and its handle is adorned with a diamond.  Light strikes the diamond and makes it sparkle.  The design of the knife and sheath is primitive, rough-hewn.  A large shadow descends on the table and extinguishes the diamond’s sparkle.

The Executioner picks up the knife.  He is muscular, athletic.  His head is shaved. His face is covered by a black mask.

Two dead wolves lie on their backs on the table.  Their limbs have been firmly tied to the table legs.

With expert fingers, The Executioner probes the abdomen of one of the wolves.  He pushes the knife sideways through the skin and abruptly jerks the knife upward.  A small opening appears in the skin.  He throws the knife.  It sticks upright in the table top.  With his bare hands, he tears the wolf’s belly skin, starting at the bottom, and with three vigorous efforts rips it open all the way up to the neck.  He picks up the knife again, places it exactly at the bottom of the cut, then slowly pushes the blade all the way under the skin.  He wrenches it upward, and the skin tears all the way down to the wolf’s tail.  A man’s penis, covered by fine hair, is revealed by the cut.

The Executioner strikes the chest of the other wolf with his knife and cuts the skin open up to the neck.  Again, he throws the knife into the table top.  He pushes his fingers deep into the cut and tears the skin sideways.  The skin rips, revealing two female breasts covered by fine hair.

The knife, stuck upright in the table top, swings slowly back and forth.  It is surrounded by strong shadows.  The diamond embedded in the handle sparkles at one end of the oscillating motion, whenever the bright light strikes it.

A graphic design text arrangement with the names of the main actors and their supporting cast.  This is framed by woodcuts depicting medieval methods of torture.  Text design and woodcuts form a white-on-black collage-like whole.  The letters are made out of (wolf) fur.

Approximately ten four-bladed guillotines stand in the hall, arranged in a perfectly straight line.  In front of each guillotine burns a big torch in a decorative stand.  Above each guillotine there is a skylight.  The moonlight falling through the skylights is reflected by the contraptions’ metal parts.  The guillotines stand on a raised stone pediment, a stage, as it were.  The people who have congregated to watch the execution have to do so at a diagonal from below.  The guillotines cast strong shadows on the spectators’ bodies.  The spectators can’t be distinguished as individuals, they are a faceless human mass.

AINO KALLAS: PASTORALE
(recording made in 1945)
Be silent, my tormented soul,
prepare to meet the Lord, your Savior,
be attentive, and clear, and altogether silent!

KALLAS
(voice only)
When the green crops sleep in the field,
He strides across the heads of poppies,
the ears of grain do not break under his steps,
the grass does not sway,
the sleeping poppy does not bend.

The Executioner throws the two wolves he has been examining onto the
two guillotines in the center.  His henchmen raise the blades

up to their highest position.  The blades are silver.  They are obviously brand new.  The henchmen adjust them for the drop.

KALLAS
(voice only)
Night steals across junipers on the heath.
He is the Savior of the tormented,
He gives sleep to the sleepless.

The henchmen attach metal cuffs around the paws of both wolves.

KALLAS
(voice only)
In the depths of the earth...

KALLAS
(voice only)
He opens...

KALLAS
(voice only)
He fills...

KALLAS
(voice only)
the wellspring of your soul...

KALLAS
(voice only)
with abundant water.

KALLAS
(voice only)
Dew has fallen on junipers and pasture,
the duck in the reeds is silent,
even the sheep are resting.

Slowly, The Executioner raises his hands toward the skylights.  The lightning rod points up at the open window.  The Executioner stands motionless.  Thunder grows more distant.  He waits.

KALLAS
(voice only)
Night steals across the junipers on the heath,
Lord, give your creation
mercy and peace.

Crash of lightning.  A lightning bolt strikes the rod.  This releases all forty-some guillotine blades at once.  People cheer.  The blades of the guillotines in the middle gleam in their newness as they begin their descent.  Some of the other blades are more worn, some are fashioned of plain iron.  Some have jagged edges.  Dried blood adheres to some of them.  The blades descend in a rush, passing through fields of light and fields of darkness.  Seen from the point of view of the crowd, their motion resembles lightning flashes.

The guillotine blades strike the limbs of the wolves.  Their paws are snapped off.  Suddenly, the air is filled with dozens of wolf paws.  Some of them fall straight down to the floor, some fly through the air.  The blades of the center guillotines strike harder.  They cause the werewolves’ paws to describe a long arc in the air. These seem to hang in the air for an eternity.

Three paws fly into the lap of a wolf that is still alive.  The wolf struggles to get free.  Its leg-stumps slide out of the thongs. The wolf turns and tries to get up on its stumps.  The paws fall off it, on the floor.  Blood flows from the stumps.

People shout and clap their hands.

Two wolves are still alive, struggling vainly against their thongs.

A man jumps out of the crowd and starts leading its cheers.

The man shouts and claps his hands rhythmically.  The crowd goes wild.

The shouting of the crowd becomes a wordless chant.

Four human bodies, covered in fine fur, lie on the guillotine platforms.  Without hands or feet, they struggle against their bonds.

The one wolf that is still alive drags itself forward on its stumps.

The man jumps over the restraining rope into the execution area.

The Executioner kicks the mutilated wolf off the guillotine platform.

The man shouts and claps his hands.  The crowd shouts rhythmically.

The mutilated wolf falls to the floor, among the cut-off paws.

The crowd pulls the restraining ropes down and charges into the execution area.

The mutilated wolf drags itself forward across the floor.

The man grabs a cut-off paw and raises it high above his head.

The crowd starts picking up paws.

The Executioner uses his knife to cut the thongs off the dead wolves.

People are fighting over the paws.

The Executioner starts tossing wolf carcasses down to the floor.

People who have grabbed paws start rhythmically clapping them together.  The man leads the beat on a decorated skin drum.

The Executioner cuts the thongs of the seventh wolf.  The wolf’s eyes suddenly open.  It locks its jaws on The Executioner’s bare forearm.

The man beats his drum with a broken paw.  The drumskin is decorated with primitive drawings.  One of these looks like a picture of a werewolf.  Blood from the paw spatters the drumskin.

The Executioner stabs the wolf into the heart with his silver blade.  The wolf metamorphoses into a blonde woman.  The Executioner pulls his knife out and pushes her body off himself.  The lower part of her body strikes the floor first.  The upper part, her shoulders, and her head describe a big arc in the air before they strike the floor.  Her hair flutters through the air and is the last thing to come to rest, fanning out in a halo around her head.

People are beating the cut-off paws together above their heads.  Blood spurts from their tips every time they strike each other. The blood is coloring people’s hair and faces red.

The mutilated wolf is dragging itself forward through the crowd. People are beating their wolf paws together.  They are covered in dark purple blood.  Their movements blend into a rhythmical whole of clapping, shouting, beating.  They are falling into a trance.

The Executioner jumps down to the floor, catches the mutilated wolf by the tail.  The wolf struggles.  People fall down.

The torch stand falls over.

The Executioner stabs the mutilated wolf in the heart with his silver knife.

The torch sets the dead woman’s hair on fire.

Blood flows from the wolf’s heart.

The dead woman’s burning hair becomes a fan-shaped halo around her pale face.  Death is beautiful.

Graphic design text arrangement with the film’s title: The Wolf’s Bride.  The design is framed with old woodcuts of werewolves. Text design and woodcuts form a white-on-black collage-like whole. The letters are made out of fur. 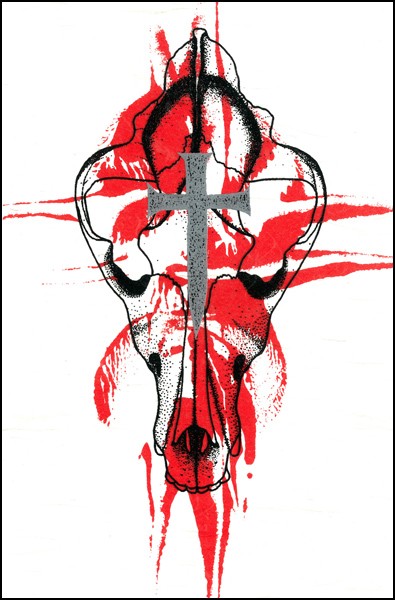