MACHINE OF THE GODS – DEUS EX MACHINA is a visual melodrama. The term refers to a mode of narration and language that emphasizes the significance of physical functions and the body's gestures. The narrative, based on heightened non-verbal action, does not derive so much from conscious thought but rather from the human mind's unacknowledged fantasies.

Machine of the Gods – Deus ex machina is based on a personal out-of-the-body experience.  Ten years ago, I suffered from continuous back pain.  When it was at its worst, when my spine was so twisted that I was no longer able to walk, I was treated at the emergency room of Helsinki's Chirurgical Hospital.  As a consequence of two morphine injections into my back, I was able to see myself from outside my own body, and — by hovering across the plastic curtain separating me from the room's next compartment — also to see a man with a bushy mustache.  After I descended back into my body, a nurse opened the curtain, and I saw the same bushy-mustached man wiping blood off his face.  This personal experience provides the starting point for the narrative of Machine of the Gods – Deus ex machina, which is also intended as a formal filmic experiment.

At the beginning of Machine of the Gods – Deus ex machina, The Patient's heart stops, and The Soul (or Psyche) detaches itself from the body and observes the hopeless attempt to resuscitate it.  The Soul wanders off and ends up in a deserted house surrounded by tall snowdrifts, at an automobile junkyard, and at an unfinished building site.  During its peregrination, The Soul sees both beautiful and ugly, organic, paintings of musculature, interior organs, and mutations, and horrifying images depicting the transformation of its own body into a stuffed human being for a zoological exhibit.  During this journey, The Soul is guided by The Woman's voice.  At the end of the journey, The Soul meets a goodwill messenger from medical science, in the shape of a panoptic wax figure that wakes up into life from its eternal sleep.  At the moment of this encounter, The Woman and The Patient fuse into one genderless Soul.  Through the panoptic figure's newborn eyes, we see a survey of the history of medical visualization.  The figure utters an oracle-like prediction on the fate of the world.  Is it a god speaking through the panopticon?  Everything fades away, The Soul returns to its body, and The Patient wakes up to life.

In its multiple significations, the title of the film, Machine of the Gods – Deus ex machina, refers to an old Latin theatrical term, to man's status as an image of the divine, and to the status of medical science as a possible divinity's secular arm.  The "deus ex machina" was the first device by which it was possible to make a human representing a divinity to fly.  Its literal translation is "god from a machine."  The term also describes unexpected help arriving in the nick of time.  In colloquial Italian, it has acquired a more general connotation, simply describing "a surprising phenomenon."  The soul's floating journey in Machine of the Gods – Deus ex machina refers to life after death in a non-substantial and genderless form of being.  It is a kind of white angel, shown as a transparent human figure without wings.  The panoptic wax figure, on the other hand, is a brutally beautiful dark angel who, like medical science, 'transmits' the soul back into its body.  Their encounter is an experience that blends jouissance and horror: the unfettered floating of the soul comes to an end, and it must return to the prison of its own body — but the human being also returns to life.  In addition to its religious symbolism, Machine of the Gods – Deus ex machina also refers to the ethical questions of medical science, e.g., what is the justification for using medical means to keep a brain-dead person alive?  Machine of the Gods – Deus ex machina also raises questions about the relationships between body and mind, and between body, mind, and technology.

Machine of the Gods – Deus ex machina examines the archeology of the cyborg on a symbolic level.  A cyborg is a composite of machinery and the organic human body, a cybernetic organism.  On one hand, the cyborg metaphor describes the objectification of the human being, on the other, the humanization of machines.  Human machines / machine humans are a classical subject in the history of literature, philosophy, and science.  They have featured most prominently in the futuristic art of the beginning of the century, and now again in present discussions of virtual reality.

In Machine of the Gods – Deus ex machina, the cyborg is represented by a panoptic doll made out of beeswax and used for medical visualization at the beginning of the century.  Several of the themes of Machine of the Gods – Deus ex machina culminate in the representation of this doll.  Its both beautiful and ugly appearance crystallizes the poles of the cyborg metaphor: the intellectual beauty / horror of bringing dead matter to life.  It serves as a conduit for a subplot dealing with the visualization of medical science. By means of its sense of sight, which has been brought to life, it conveys to the audience a survey of that visualization's modest beginnings in woodcuts all the way to the human body's 3-D modeling on the Internet.  Images of mutations also represent the human body's physical changes.  The dioramas and panoptic wax dolls used as parts of the story of Machine of the Gods – Deus ex machina have themselves been essential means of medical visualization.

The most challenging filmic aspect of Machine of the Gods – Deus ex machina is the practical realization of the themes of soul travel and the vivification of a wax figure.  The soul's hovering is effected by means of Stedicam and SkyCam point of view shots; by mechanical rigging and animation of a live actor; and by optical and digital combinations of these images.  The facial and eye movements of the wax figure are created digitally by composite and cgi methods. Machine of the Gods – Deus ex machina is filmed on a number of different materials, some of which are hand-tinted and combined into a collage-like whole.  The soul's floating journey and the wax figure's ugly beauty are the film's central visual elements and provide its stylistic framework.

The narrative of Machine of the Gods – Deus ex machina is carried not only by audio-visual means but also by narrative methods typical of cyberpunk literature.  Essential features of cyberpunk are anti-realistic disjunctions and a mix of different modes and genres of narrative.  Cyberpunk deals with relationships between language, the body, and technology.  This is evident in the entire genre on the levels of story and the formal language used in its telling. Machine of the Gods – Deus ex machina describes the body / technology relationship by referring to itself, to different filmic modes of narration, and to technical modes of realization.  On one hand, it is a dreamlike fantasy, reminiscent in style and technical realization of the early twentieth century's Expressionism.  On the other hand, it is a documentary hallucination related to virtual culture and realized by digital means.  This duality, itself, does of course refer to the cyborg metaphor's own history.  The opening and closing credits in 'digital flesh' also attempt to concretize this body / technology relationship.

Machine of the Gods – Deus ex machina will receive an original soundtrack influenced by concrete music.  During the dismemberment and reconstruction of The Patient's body, the film will use a poetic sequence, Scorcher, written by Harry Gamboa, Jr. for this purpose.  His Atlas Aria is the Panopticon's forecast for the future.  It is a speech made by a possible deity. 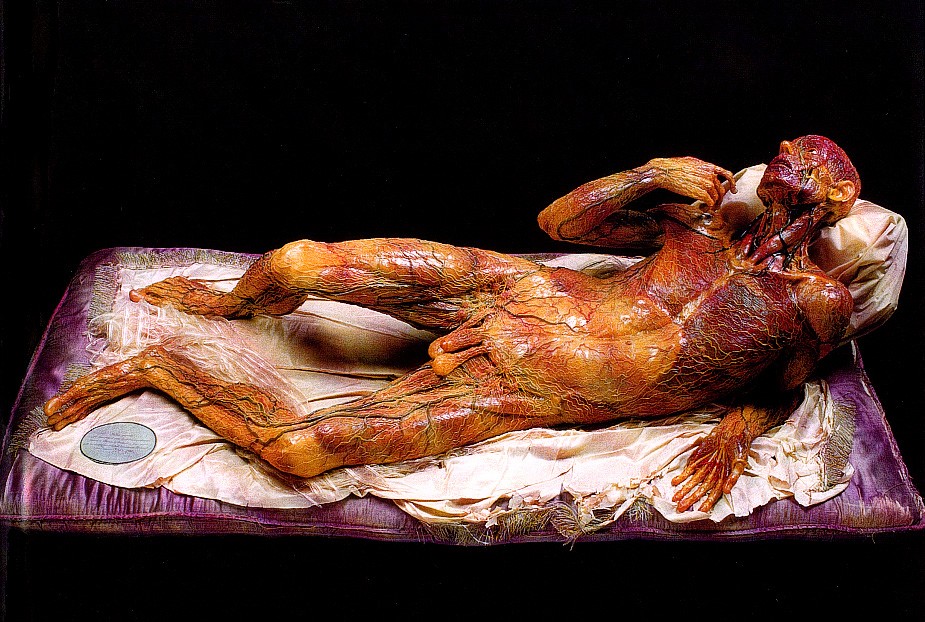