The main and essential thing is: The sensory exploration of the world through film… We therefore take as the point of departure the use of the camera as a kino-eye, more perfect than the human eye, for the exploration of the chaos of visual phenomena that fill space.
– Dziga Vertov

UK-educated Ilppo Pohjola is among the most visually inventive filmmakers to have emerged from Scandinavia during the last decade. From the beginning of his career, he has shown a commitment to the exploration of the political and visual boundaries of audiovisual media (cinema, television, and video), juxtaposing elements and influences from sources such as the graphics arts, music video, video art, and traditions of radical and experimental filmmaking. For example, Pohjola’s Daddy and the Muscle Academy (1991) was an experimental documentary about the art, life, and influence of Tom of Finland, a Finnish-born, queer graphic artist, whereas his P(l)ain Truth (1993) brought the conventions of graphic art and experimental filmmaking into play with an almost documentary investigation of transgendered identity.

His most recent film, Routemaster (1999), as well as the preceding Asphalto: An Aria for 13 Gas Stations and Demolition Cars (1998), continues the exploration of the limit(ation)s of classical film narrative by focusing on filmic movement in tandem with the speed of racing cars. Drawing from a tradition of structuralist filmmaking and the principles of minimalist art, Routemaster combines their common emphasis on repetition and slight variation, using rapid and complex editing of very similar images to disrupt the flow of linear time and strict spatial continuity. These techniques create an interestingly paradoxical sense of both a slow, almost mathematical, progression of images and the unbridled visual chaos of extreme velocity and frenetic movement. The film’s minimalist structure is assembled from three different sets of visual materials (shot on Super-8 and blown up to 35 mm). On the one hand, there are highly stylized black-and-white shots of racing cars in motion, edited together following the increasingly rapid rhythm. These black-and-white shots are then contrasted with near-abstract details of a checkered flag, shot in color and slow motion. Towards the end of the film, Pohjola introduces a third element, color images of human cadavers used in automobile crash testing.

Pohjola has released Routemaster in three different film versions, each with its own soundtrack (The Original San Francisco Mix, Tokyo Noise Mix, and London Dance Mix). Further expanding his interests in multimedia production, he has also made a radio program based on the same audio material. The music in the film versions sometimes works in tandem with the visuals, synchronized with the pace of the editing; but at other times it is in contrapuntal relation to the images and editing. In any case, the music, with its increasingly rapid rhythms, shares with the visuals an emphasis on manic movement and hypnotic progression. These industrial sounds, ‘remixed’ in different variations, like the visuals themselves, equally evoke the sense of aggressiveness and technological destruction that characterize the film as a whole.

Clearly with these visual and auditory strategies Pohjola invites his audience to explore the specificity and materiality of images, the relationship between sound and image, and the cinematic construction of movement. Together these three different versions of Routemaster create an experimental geography of music and sound. Pohjola’s work contemplates how sound space influences the way we see and experience our visual environment. Furthermore, akin to several avant-garde filmmakers, Pohjola is experimenting with various formal solutions in order to find ways of creating a sense of cinema as the pure movement of graphic elements. One might think of his work in connection to that of Sharits, Rimmer, Snow, Frampton, or Brakhage—who at times explored the film medium itself through repeated and gradually degraded film loops, ‘flicker’ films entirely made up of simple, rhythmically alternating light or dark frames, or through techniques that highlight the celluloid itself, or which isolated aspects of cinematography, such as lens focal length, angle of view, or camera movement. Here Pohjola uses repetition and slow motion to progressively disconnect a filmic image of racing cars from their real-world referent in favor of abstract, non-referential images of movement.

From one shot to another, the frame is divided into smaller and smaller parts, each repeating the image of racing cars. From a single, grainy image, we move to a split screen, with two slightly different images of cars speeding right to left divided at the center. Three-panel views of different images also intervene, with this strongly directional, flashing, black-and-white movement also contrasting with their side-by-side configuration. Gradually Pohjola creates a mosaic image put together from over 2000 tiny shots filling the screen simultaneously. The movement of the image ‘content’—the racing cars—becomes too minute to be visible, and is instead completely reduced to a patterned graphic effect, pulsing surges of light and shadow, arranged in vertical columns, but repeating (and recalling) the same right-to-left trajectory of the speeding cars. Also recalling earlier phases of the film’s progression, this mosaic is itself at times split into three columns, with the central panel introducing new material (for example, the crash-test cadavers) in patterned interjections. The result is an abstract image of movement that foregrounds the filmic material (still images) and the filmic construction of movement. Here our aesthetic pleasure is based on the manipulation of image, time, and movement, reaching a highly sophisticated complexity in Routemaster’s audiovisual crescendo. 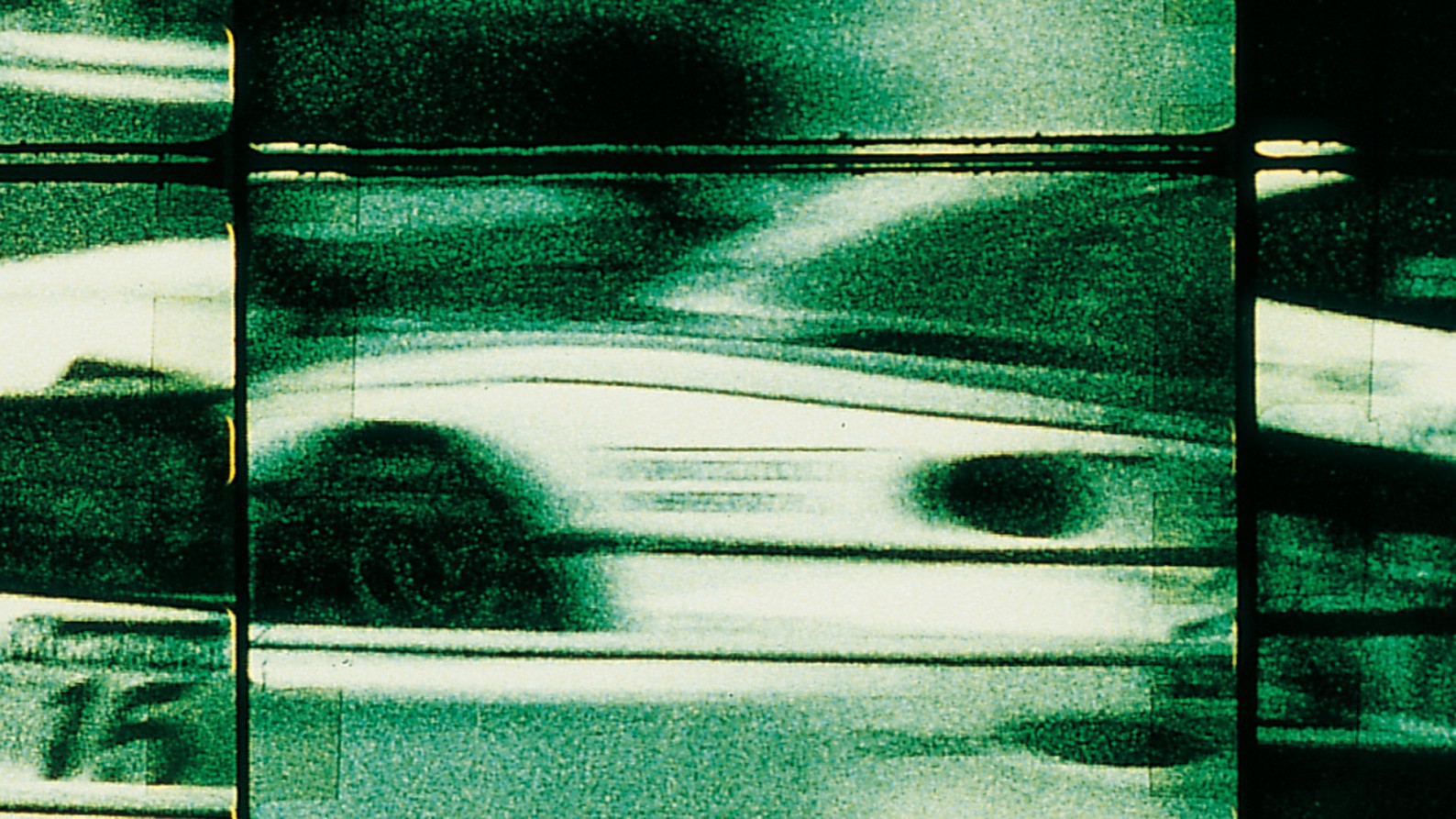