1+1+1 = DIFFERENCE BETWEEN PAST AND FUTURE

1 Plus 1 Plus 1 – Sympathy for the Decay premiered at the Oberhausen Short Film Festival in April, and had its Finnish premiere at the Love & Anarchy Film Festival in September 2012. Both premieres were accompanied by live music. 1 Plus 1 Plus 1 – Sympathy for the Decay sparkled a passionate debate among those who experienced the live cinema events.
—What is the conceptual film all about? I think the following.

1 Plus 1 Plus 1 – Sympathy for the Decay explores the manipulation of reality-based content and documentary material by adapting the conventions of experimental film and minimalist repetition in music to stretch the limits of narrativity and representation.

DERBY CHILL OUT (8 min; one manipulated image) is the first episode. It documents an encounter between nature and technology, the perishability of man-made material. We see a car scrap yard abandoned twenty-five years ago. A thousand cars lie strewn around a forested autumn landscape. The cars have rusted and disintegrated, their metal surfaces covered by moss and lichen. Some of the cars are completely covered by plants, with trees and bushes growing through their windows, motors and crushed bodies. Nature has reclaimed its space from the products of technology. The atmosphere of the place has a mysterious sense of impermanence to it.

The episode is romantic-sentimental in style. The footage consists of carefully arranged tableaux and calm, controlled camera movements. The editing is also deliberately controlled and unobtrusive. At times the episode looks like a pastoral film about metal changing into rust in a Finnish forest landscape.

BACTEROID (12 min; one ‘polluted’ image) is the middle episode. It is an experimental animation about the effects of pollution on sex determination in micro-organisms and on the physical morphing of the body. The genotype of micro-organisms is affected by traffic pollution, by many substances used in agriculture and the chemicals industry, as well as things like primer paints in boats. The micro-organisms become hermaphroditic, their sex changing into the direct opposite. There is also another view whereby micro-organisms have no sex at all, and the whole subject arises from the human need to project ourselves onto the animal world.

The subject is treated symbolically. Without being precisely defined, the micro-organisms are represented by translucent pieces of animated adhesive tape. The pieces are manipulated to the point of unrecognisability using a Rostrum camera and solarisation with back-projection. These imaginary life-forms represent all the micro-organisms in the world that have changed their gender-identity and physical appearance as a consequence of human actions.

The footage is treated with the same kind of substances, chemicals and pollutants that the micro-organisms have to filter into their systems. Some of the film has already been kept for several years in cans filled with these substances. As a result, some of the colours in this episode have changed completely, some have eroded, some have corroded to the point of shapelessness, some of the film cans are completely rusty, some have almost been eaten through… In other words, the footage itself has been exposed to the effects of the same substances as the micro-organisms that it represents – not just the form and content of the work, but the material itself, are all one.

The rhythms of the symbolic images, the division and separation of the pseudo-organisms, are combined with electronic music in minimalistic accompaniment. The result is a trance-like mood that communicates powerfully on an emotional level the moral questions associated with the theme.

SPLIT SCREEN STIFF (40 min; one or two b/w images superimposed into an abstract animation) is the concluding episode. It is a rhythmic triptych about the use of human cadavers in medical research. The framework of the episode is an interview with Dr Dimitrios Kallieris of Heidelberg University. Dr Kallieris covers the history of crash tests, the research methods, and the tests’ medical significance and findings. We also learn that individual people are willing to donate their body for medical research to promote the wellbeing of others.

The formal structure of the episode is based on the act of chopping up speech to establish a certain rhythm. The interview with Dr Kallieris is divided and presented in the right and left triptych frames. The middle frame presents mainly classic footage – archive tapes, diagrams, photographs, etc. Rapid cuts between the facial shots in the outer frames, repetition of key terms and words and the rhythm established thereby, together these elements create an almost musical sequence with repetition in which the interviewee seems to be having a conversation with himself.

The interview footage is black-and-white, accentuating its pixelised quality and difference from the other episodes. Some of the other footage is also monochromatic, especially the symbolic images in the middle frame, and also the transitions in the outer frames. The musicality of the episode is also underlined by the use of hand-painted, superimposed colour footage.

The soundscape of the episode consists of manipulated sounds that are mixed to resemble musique concrète. The sounds are taken from recordings made in the shooting situation, but also include individual words, speech sounds, sighs, breathing, etc. taken from the interview. These are all presented under the rhythmic speech that conveys the information. On the soundtrack, this sound material is mixed with contemporary classical music.

1 Plus 1 Plus 1 – Sympathy for the Decay is a film in three episodes about the consequences of moral choices. It explores the manipulation of reality-based content and documentary material by adapting the conventions of experimental film and minimalist repetition in music to stretch the limits of narrativity and representation.

1 Plus 1 Plus 1 – Sympathy for the Decay is a stream of thought that separates the past from the future. 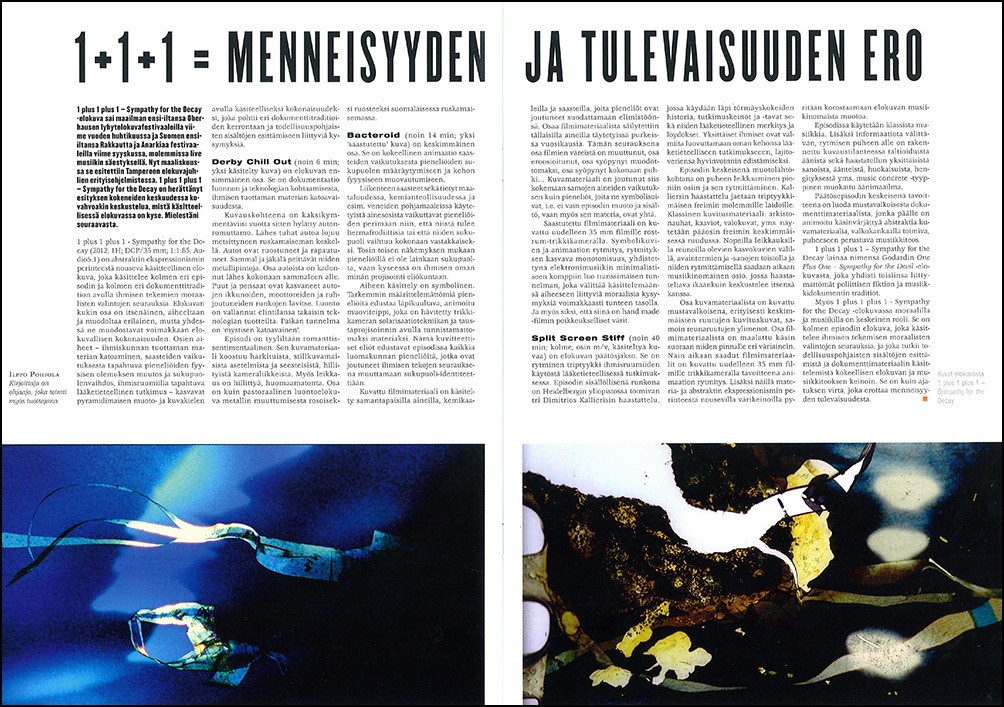 1+1+1 = DIFFERENCE BETWEEN PAST AND FUTURE