It’s hard to categorize Ilppo Pohjola as a filmmaker and an artist, as he moves so effortlessly from one medium to another. He has written and directed two films, Daddy and the Muscle Academy (1991), a documentary on Tom of Finland, and P(l)ain Truth (1993), a meditation on transsexuality. In addition, he has directed several television documentaries and videos. Pohjola is also known as a photographer and a graphic artist, having designed numerous posters, catalogues, leaflets and books. Indeed, one might argue that what ties his various projects together is a systematic exploration of the formal boundaries of different media – boundaries which Pohjola implicitly overturns by bringing the conventions of one medium into play with another. Most markedly, one cannot help but be struck by the impact of Pohjola’s work in graphic design on the composition of images in his video and film works. But Pohjola’s formal experimentation is not exclusively concerned with redefining the aesthetic or ontological characteristics of visual media. More importantly, one might argue, Pohjola’s bold and sometimes unprecedented combination of  modes is intrinsically related to the author’s interest in deconstructing the politics of sexual identity.

Ilppo Pohjola’s latest film, Asphalto – An Aria for 13 Demolition Derby Cars, Girls & Gas Stations (1998), continues this exploration of both the politics of sexuality and the limit(ation)s of classical film narrative. Pohjola draws from a tradition of experimental filmmaking, in particular from structuralist filmmaking and its emphasis on repetition, in order to deconstruct classical film narrative. The film systematically and repeatedly evokes various gendered metaphors and symbols – related to car racing, roads, speed, and destruction – to examine the (mis)communication between a man and a woman. It is structured around two parallel and interleaved fragmentary narratives, the ‘story’ of a woman in a demolition derby and a road-movie-like documentation of Finnish gas stations. Both of these semi-narrative strands are conveyed in a highly stylized fashion, employing a seemingly contradictory mixture of visual tropes: black and white and color footage; still, slow-motion, and fluidly moving images; documentary and fictional elements; naturalized ‘geographical’ and highly theatrical spaces; and frequent superimposition of graphic design (split-screen and triptych compositions, text and logos) onto these elements. Moreover, instead of relying on synchronized sound, Pohjola creates an ambiguous auditory space which obscures the boundaries between voice-over, dialogue, monologue, and internal monologue.

In Asphalto, Pohjola is clearly attempting to appeal to his audience on multiple levels through a sort of graphic art in motion. By utilizing a dense mix of  industrial and automotive sounds (95% of the soundtrack was fabricated during post-production) and superimposing text and logos over otherwise naturalistic images, Pohjola creates a three-dimensional audiovisual collage. To be sure, his aims have little to do with the conventions of cinematic realism (however one might understand such a term). Rather, Asphalto suggests itself as a postmodern take on Eisensteinian filmmaking, in which various images and sounds collide both for maximum audiovisual effect and to arouse certain associations and concepts in the spectator’s mind. Eisenstein typically employed such collisions through editing to create a clear message or concept, unabashedly pursuing ideological propaganda through his art. Asphalto, however, remains elusive in its meaning. Where Pohjola’s previous films have carefully constructed social and political interventions through formal mode-mixing and metaphoric imagery, this most recent film’s associational effect might be described as primarily tonal or connotative, rather than strictly referential in its impact on viewers.

The privileged trope underlying both the structure and content of Asphalto is not simply formal deconstruction, but diegeticized destruction. Indeed, according to Pohjola himself, the film draws from the principles of so-called ‘destruction art,’ a millennial genre perhaps best exemplified by the live performance art of groups such as Survival Reseach Laboratories, who have staged, for example, the gruesome encounter between randomly violent and out-of-control machines and animal cadavers. On the most superficial level, Pohjola’s film functions as an experimental documentary on the demolition derby, a sport whose pleasures are based on the spectacle of havoc, of non-linear, unchoreographed motion, and the progressive stages of physical decay which result. In this sense, the film is literally about destruction. Furthermore, the film’s ending with its heaps of tires may even suggest a destruction of the Finnish landscape, caused by the industrial waste of the automotive age and corporate car culture (Esso, Firestone, and Shell share equal honors with the names of Finnish towns).

The underlying idea of decay and destruction is related to another trope in Asphalto, important to Pohjola’s work in general: the gendered body. In this film, the body functions as both subject matter and a vehicle for self-reflexively exploring concepts unique to the artistic form itself. That is, the film’s narrative body is constructed through a collision of parts in a near-scientific progression. This formal composition is applied to the anatomical and geographical body and its dissection. The film opens with evocative shots of a muscular, bare-chested man running on-the-spot on a ruined road in the middle of a military target area. The soundtrack emphasizes the monotonous rhythm of his footsteps, the recitation of numbers, and industrial noise, suggesting a relationship between the male body and a machine or motor. This notion of the male body as machine is itself an underlying cultural narrative in car racing, emphasizing the integral relationship between the car (machine) and its (male) driver. The repetition of numbers, distances, lengths of roads shifts attention from the individual human body to the geographical body of Finland. Using superimposed maps, aerial photography, still pictures, and super-8 film, Pohjola records the Finnish landscapes along Highway 4 through Finland, contrasting images of small-town gas stations from 1983 with those of 1997. The geographical body is dissected with surgical precision, as each place comes under closer and closer scrutiny in a progression from far (map, aerial views) to near (close ups and traveling shots of local scenes).

These images of gas stations are paired, through the use of split screen, with runway models’ highly stylized and controlled poses, thus linking the dissection of Finland’s geographical body to a metaphorical dissection of women’s anatomical bodies. The rationale underwriting such a comparative structure is found in the women’s dress (skimpy rubberized, leather or latex outfits bearing automotive logos), which marks them as objects commodified for visual consumption in and of themselves, as well as functioning as promotional accouterments to advertising culture. And each new pairing of the geographical and the model’s body is introduced by the recurring image of a body outline used for target practice. A gunshot rings out along with the spoken name of the town, as a close-up of a part of the target isolates the point on its body which has been damaged with a visible bullet hole. The body, in all its manifestations, then, is marked as the object of violence, as the anatomy of Finland, the models, the target, car bodies, and so on, are dissected for closer examination and metaphorically or literally associated with damage. Ultimately, the film offers an ambiguous conflation of these levels of bodily damage, as the models’ bodies are shown lifelessly strewn among the heap of used and discarded tires in Asphalto’s closing images.

THE DIFFICULTY OF WORDS

These two tropes of destruction/dissection and the body establish a context for Asphalto’s treatment of communication between a man and a woman. Again, it is almost needless to point out that Pohjola makes no attempts to create a realistic portrayal of their relationship. Rather by means of allusions, metaphors and the actors’ performances (arising out of the tradition of performance art and physical theater), he hopes to achieve a sense of aggression, related to the difficulty of communication. This is most directly suggested by the woman’s poetic monologue, written by Harry Gamboa, Jr., which uses almost Bakhtinian (carnivalesque) imagery of corporeal transgression to communicate its message of male passivity and the way it regards communication:

Again, this kind of language of both aggression and transgression, and the conflation of the automotive with the masculine (with the evocation of visceral bodily violations), finds its filmic equivalent in images of ruin and the collision of cars, and in a narrative structure that similarly emphasizes the fragment over the whole. Indeed, Asphalto’s main thrust is one of vacillation between insistent repetition and small changes within repeated fragments which mark the film’s advancement. Despite its clear formal elegance and strong narrative (and geographical) progression, the film remains more elusive than Pohjola’s earlier works, avoiding any explicit political message and leaving it to the spectator to draw conclusions and make connections among suggestive elements. In that sense, Asphalto may represent a new direction for Ilppo Pohjola. 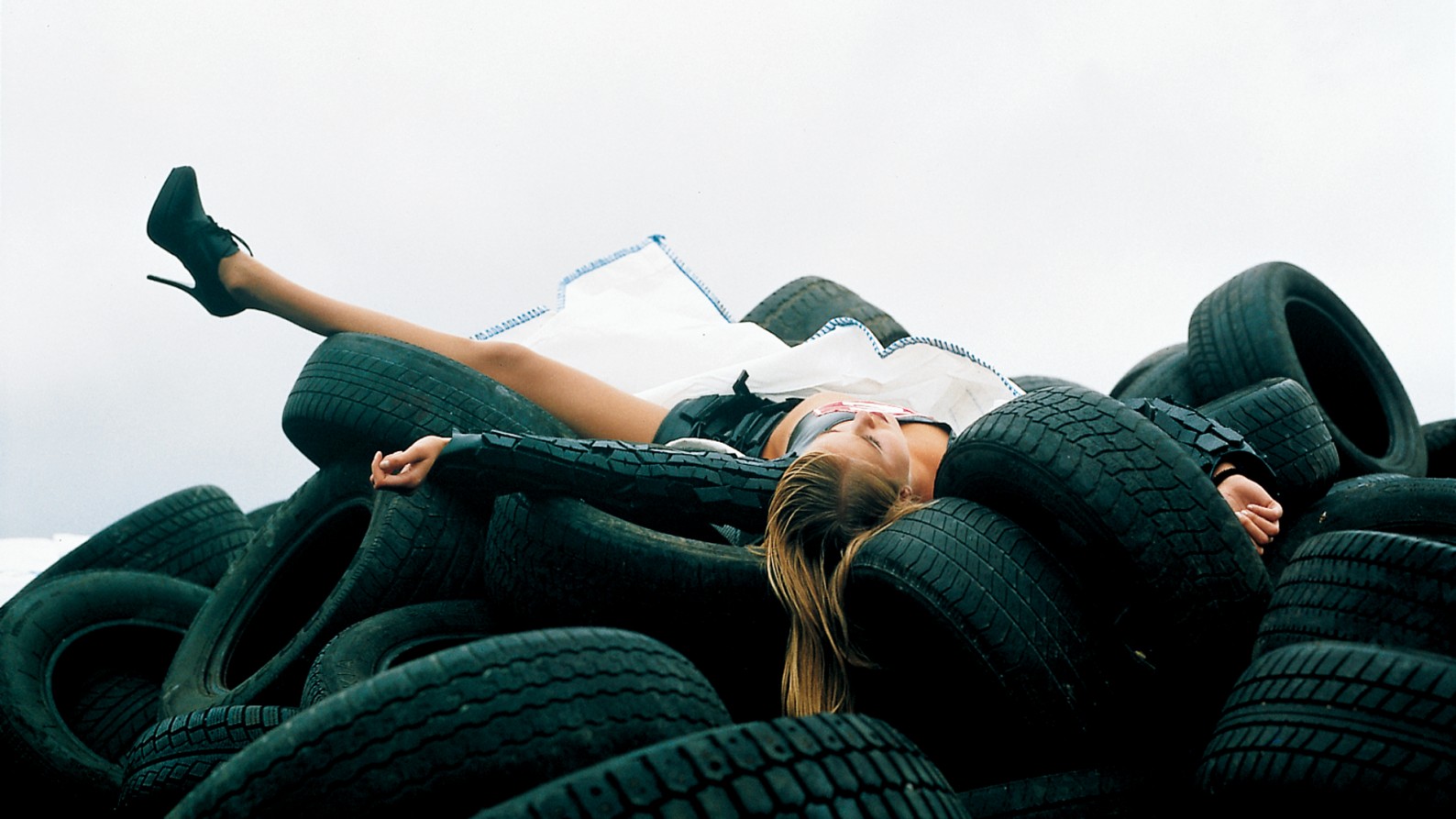