Synopsis – Where is Where?

”... How far can you enter into someone
to understand them?
To experience their country, their postures, the stigmata,
to be startled by that.
Which words will take you there,
which words will show you
what happens.
The mountain, the plain, the sand, the water in me, which is the same.”

The theme of WHERE IS WHERE? is colonialism and the presence of two different cultures. It raises the question of how to portray a historical event, and how it can be seen and understood within the framework of the present, and who has the right to interpret the event in the first place?

The starting point of the piece is a real event that took place in Algeria at the end of the 1950s. At that time, Algeria was still under French rule and was involved in a long struggle for independence from the mother country. The situation was extremely violent, both because of recurrent assassination attempts and bomb attacks by the resistance movement and because of the French government’s harsh countermeasures. As a consequence of and reaction to the brutalities committed by the French, two Algerian boys killed their friend, a French boy of the same age.

Although the starting points are based in reality, at the heart of the story is the relationship of the event with the contemporary situation. The narrative begins from the present, which is gradually interwoven with the boys’ deed and the events in Algeria. On the one hand, the murder committed by the boys is seen in the light of the current world situation, on the other, the approach attempts to put contemporary cultural conflicts into a historical perspective.

The story has three main characters: Adel and Ismael, the Arab boys who committed the murder, and a European poet, a woman of about 40. The story opens with Death entering the poet’s house. Entering into a dialogue with Death, the poet tries with the aid of words to clarify what happened and what had led to the violent deed. The murder is taken out of the time of its occurrence and brought into the present day. As mist clears from the back garden of the poet’s house, it reveals a boat that has appeared in the pool, with Adel and Ismael sitting in it. Gradually, the focus shifts from the poet’s world to the boys’ reality. What the boys say and the inevitability of their deed – with its causes and consequences – take centre stage.

In the installation, the events are presented through fictive scenes and black-and-white archive footage. Additionally, key events are emphasised by presenting them in a token theatrical setting that disconnects the events from their temporal context, turning them into an isolated, seemingly placeless dialogue.

Where Is Where? is presented on six projection screens. Four of the screens create a space that surrounds the viewers. The narrative is constructed so that it establishes a continuous cinematic space between the four screens. For example, an event taking place in a room in Algeria is shown from four different perspectives so that the viewers seem to be standing inside the room defined by the screens. When an actor on one screen speaks across the installation to another actor on another screen, the viewers’ space becomes integrated into the space of the narrative.

This situation alters the viewers’ position: standing in the midst of the space, they inevitably lose their cinematic privilege. The privileged narrative space constructed for the audience is unravelled. Some aspects of the overall event inevitably remain behind the viewer’s back, thus preventing the formation of a unified experience every time for every viewer.

The installation format also echoes the subject of the work and the issues raised by it: how to present a historical event and how we can see and understand it. And how, no matter what we do, part of the event will remain in its space, outside our perception and signification. 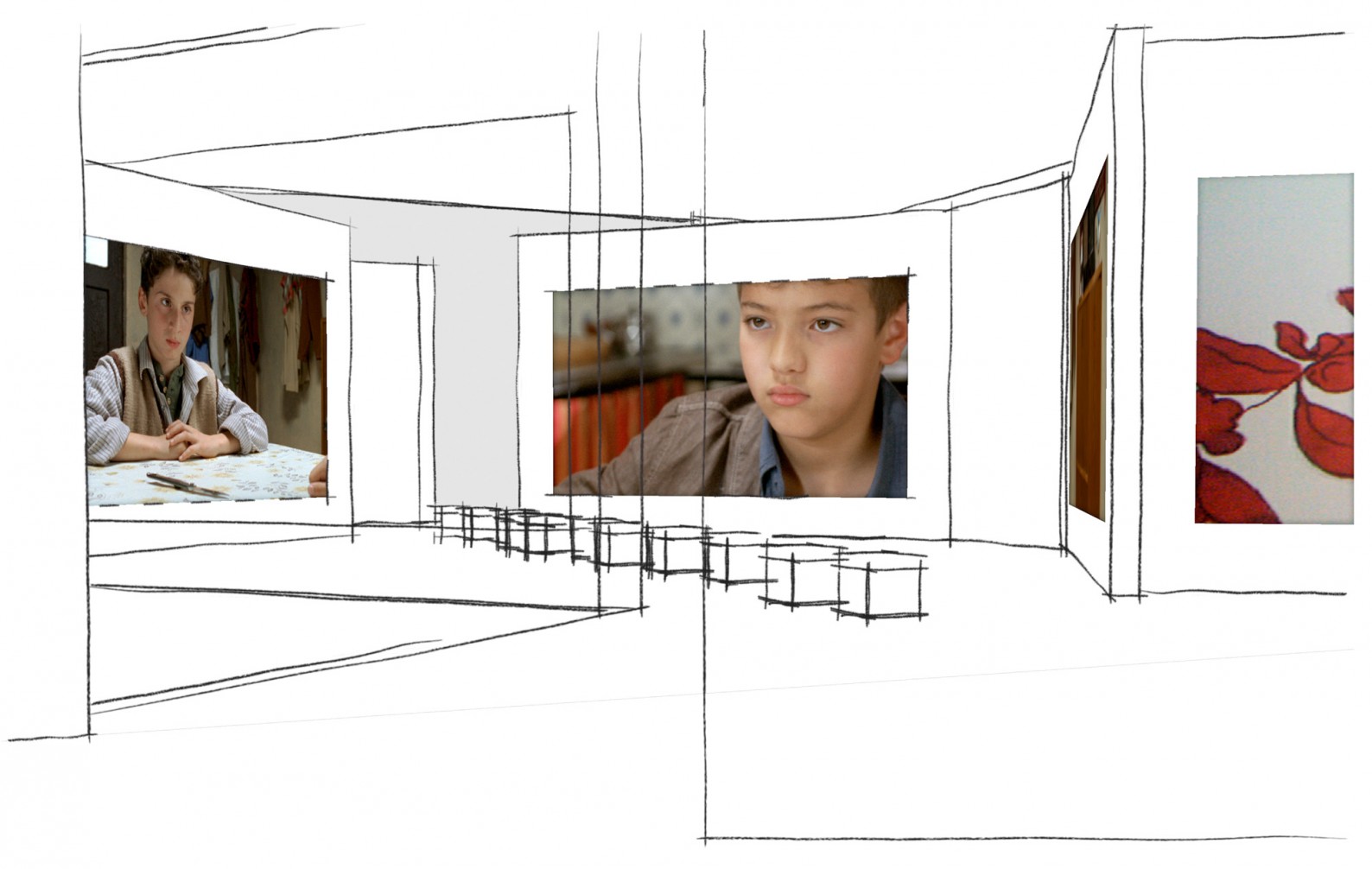