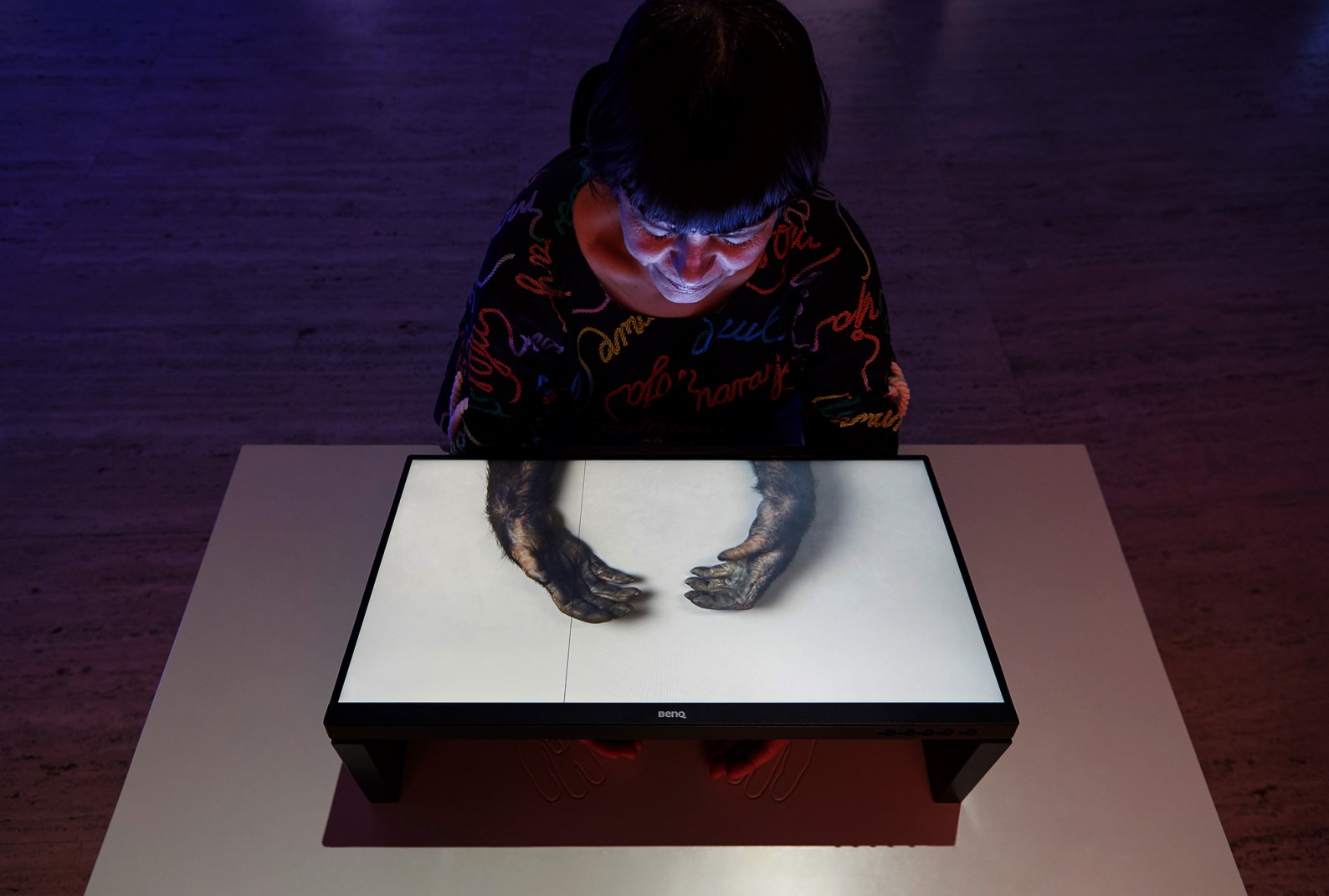 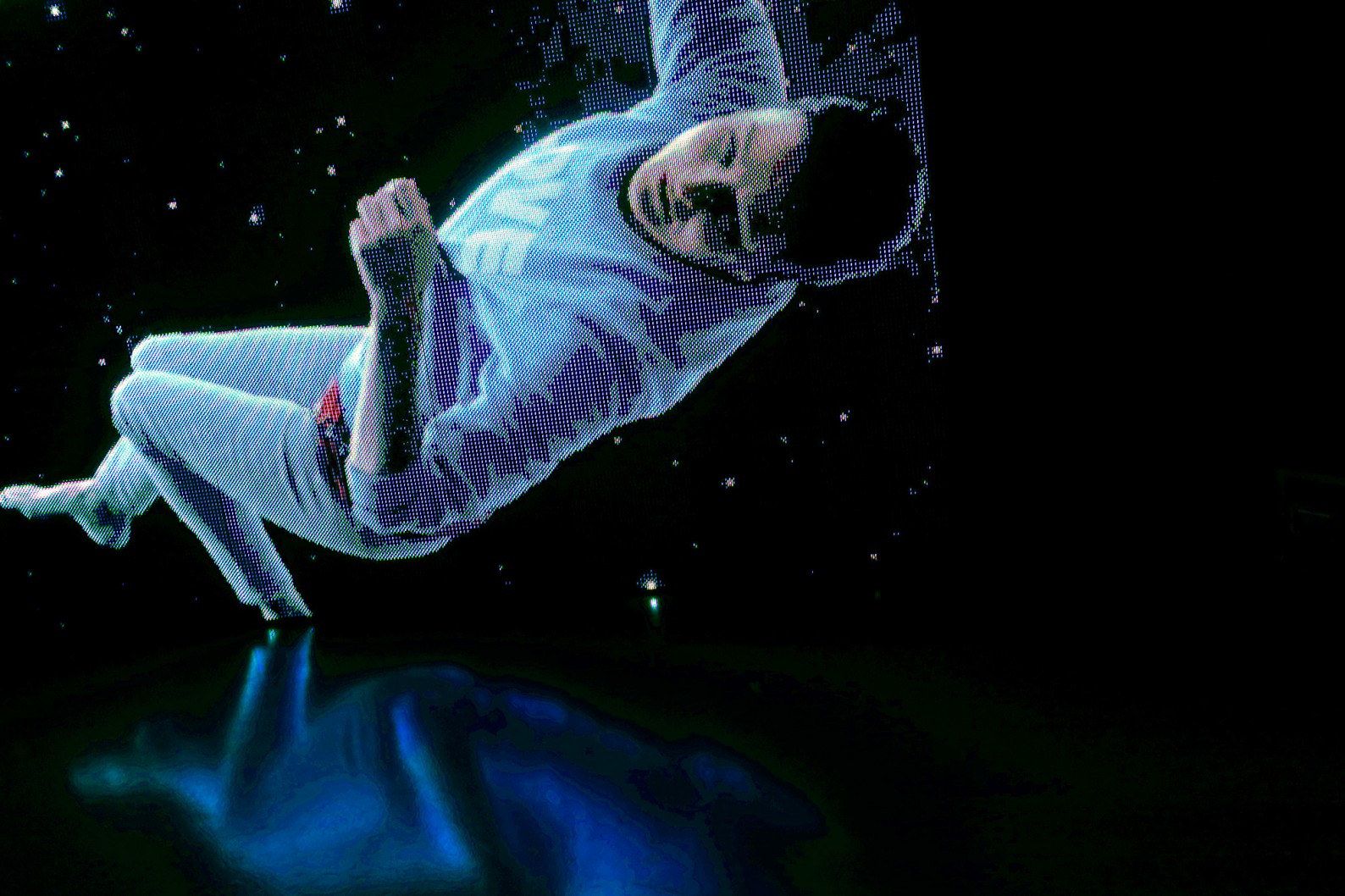 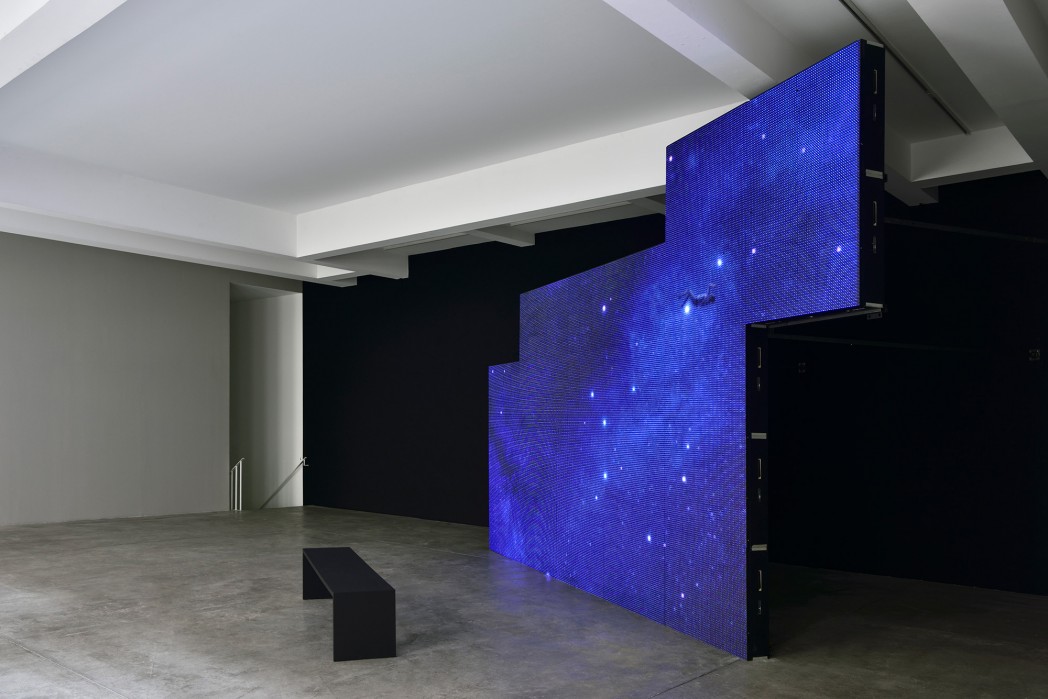 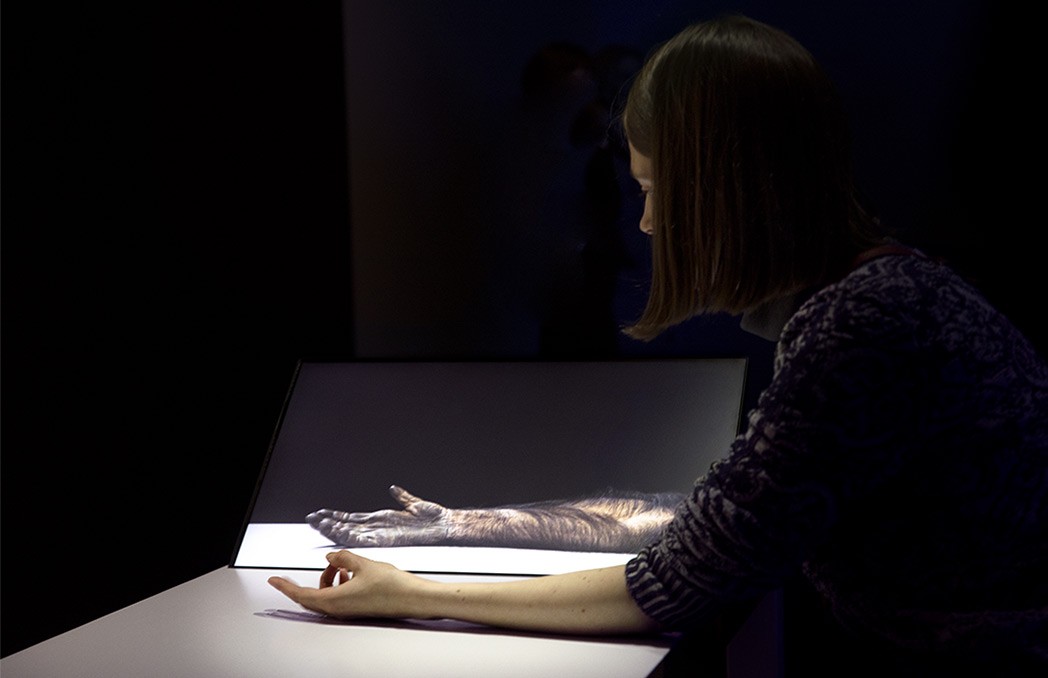 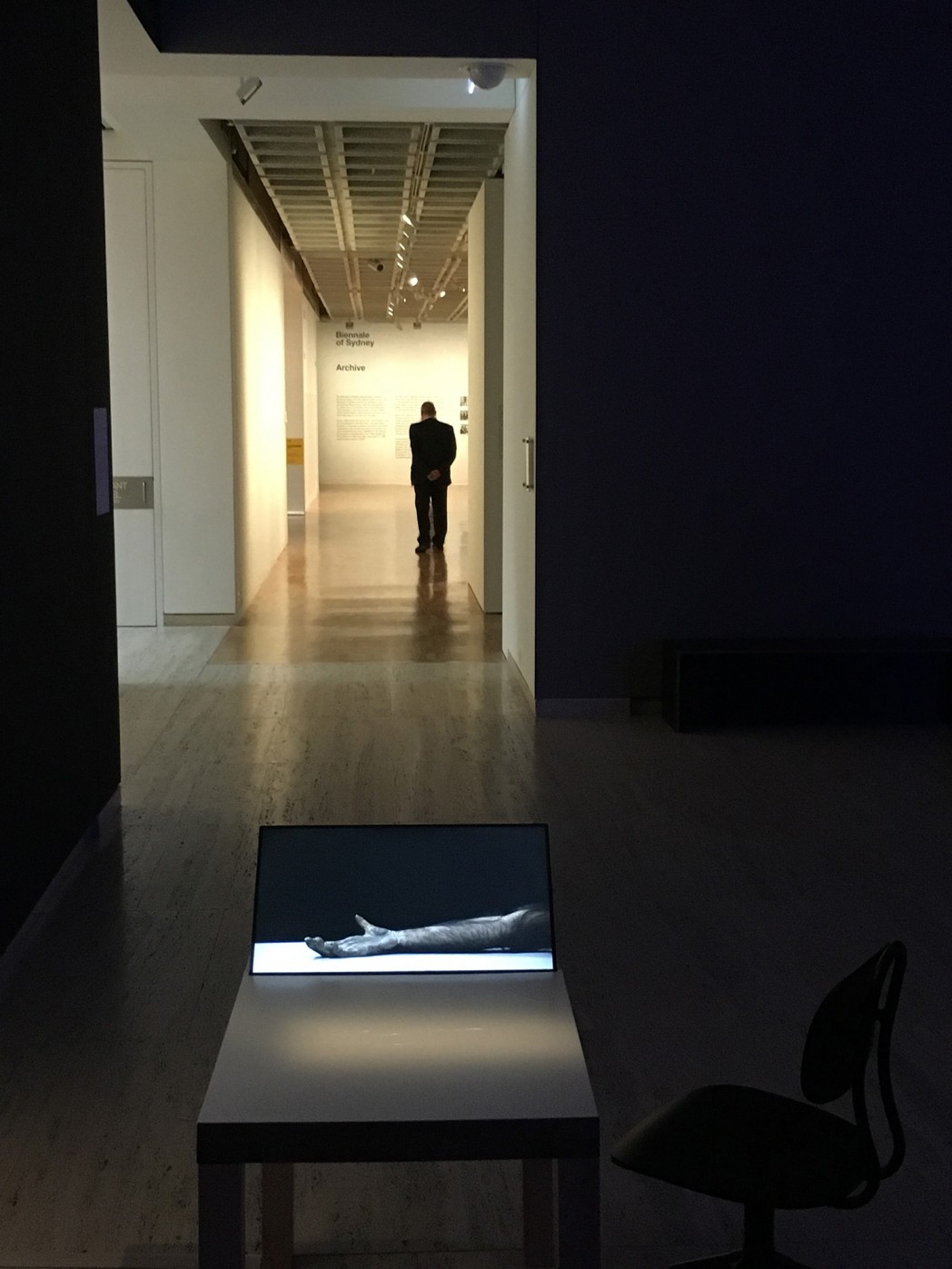 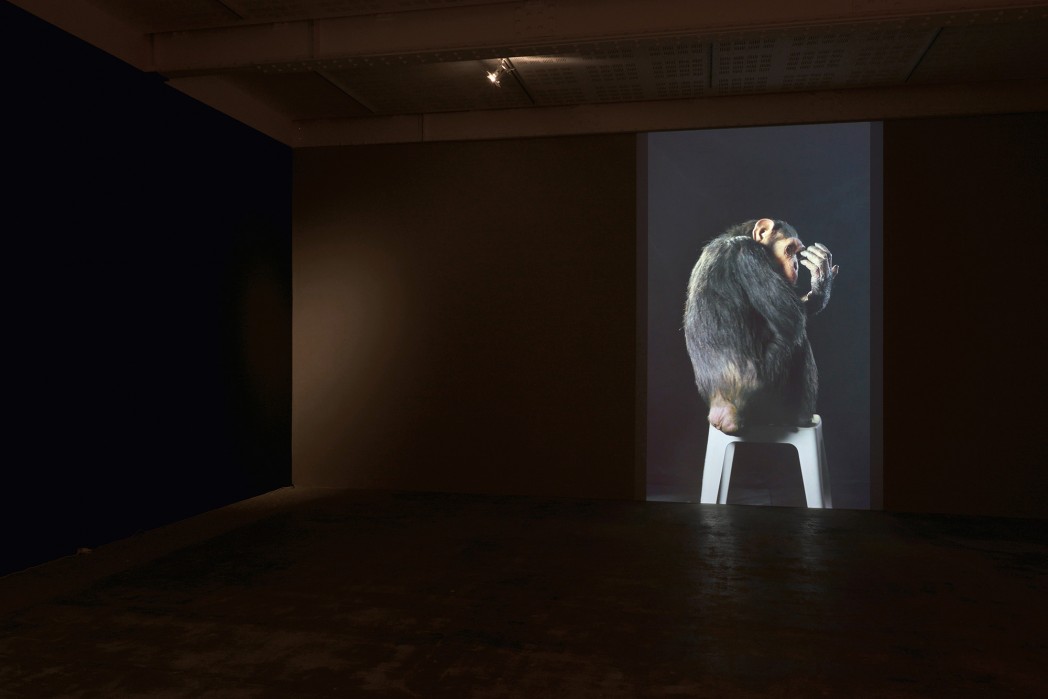 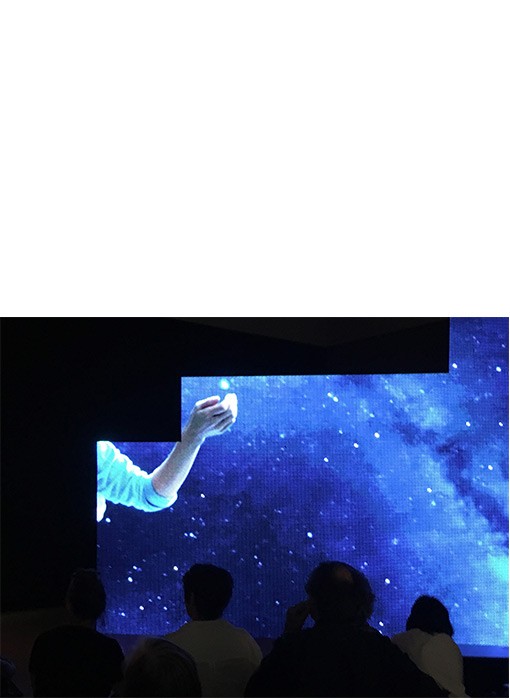 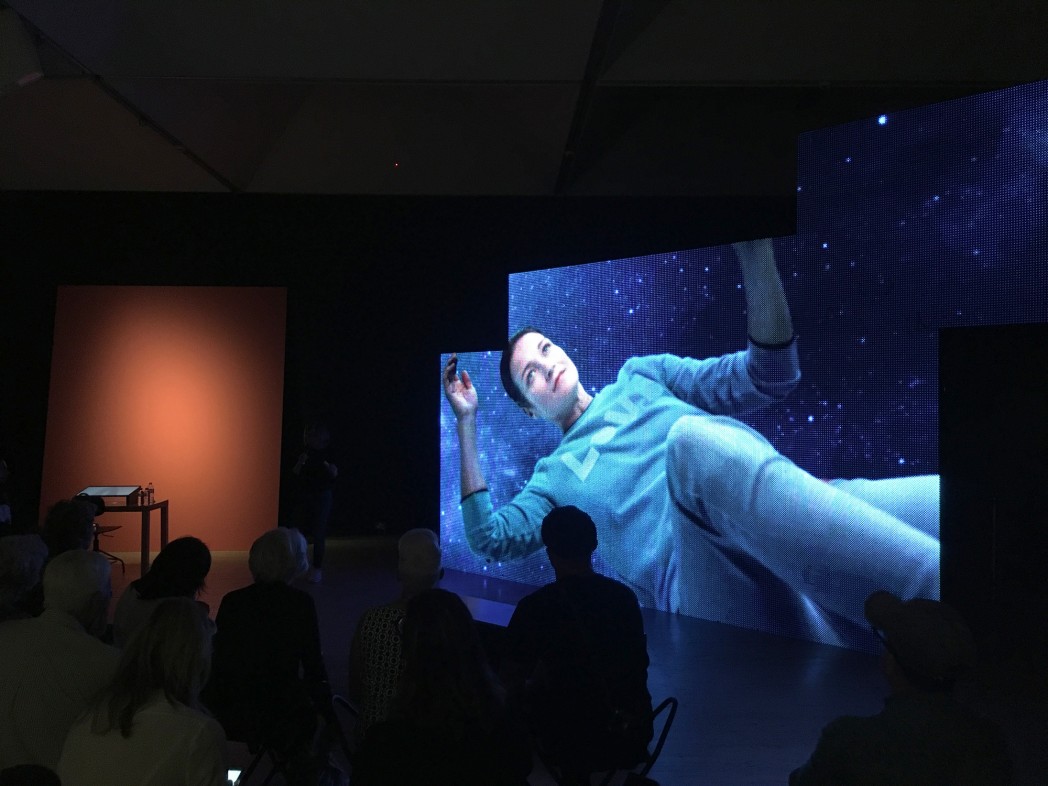 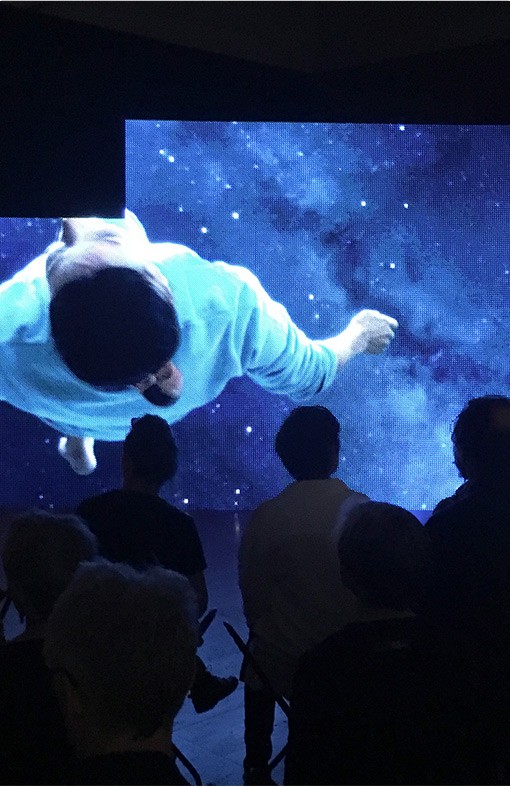 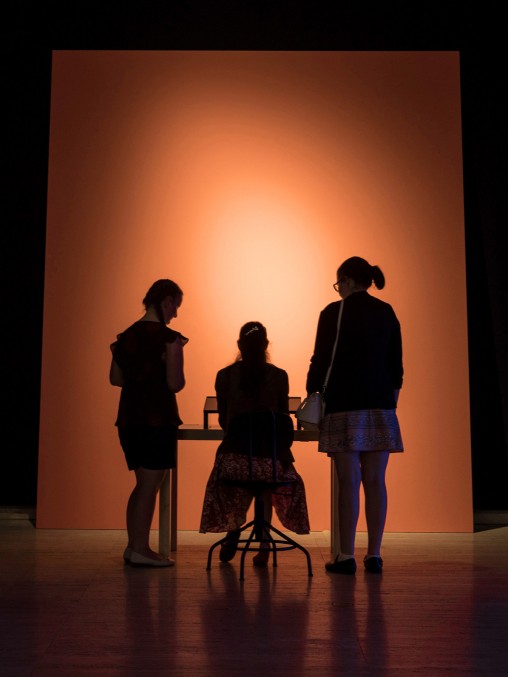 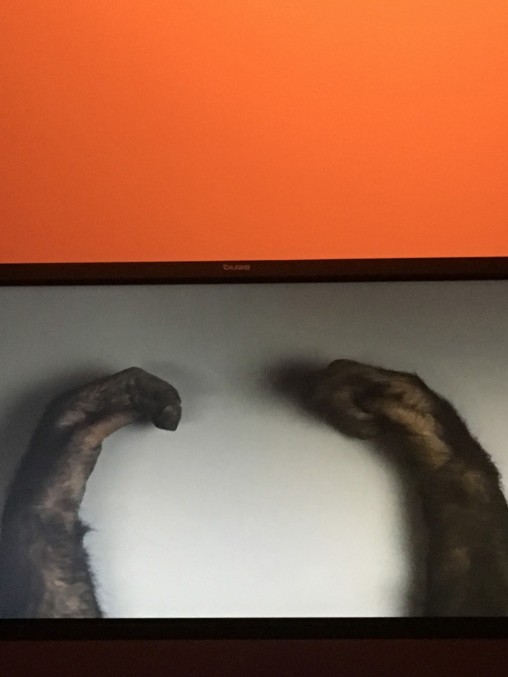 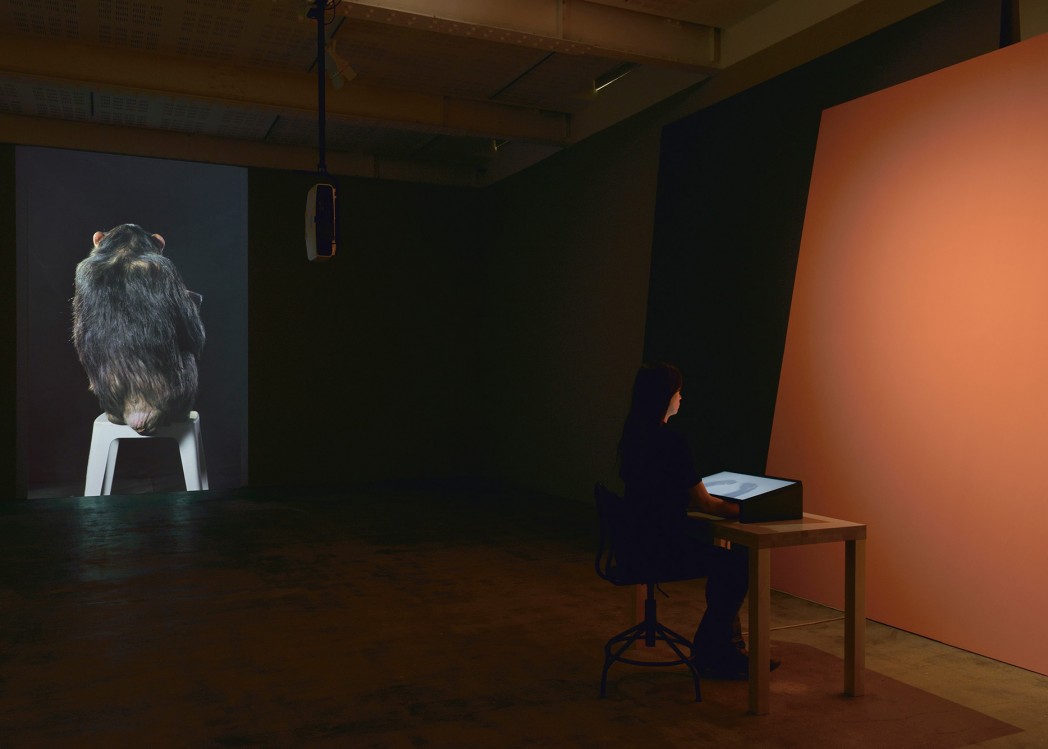 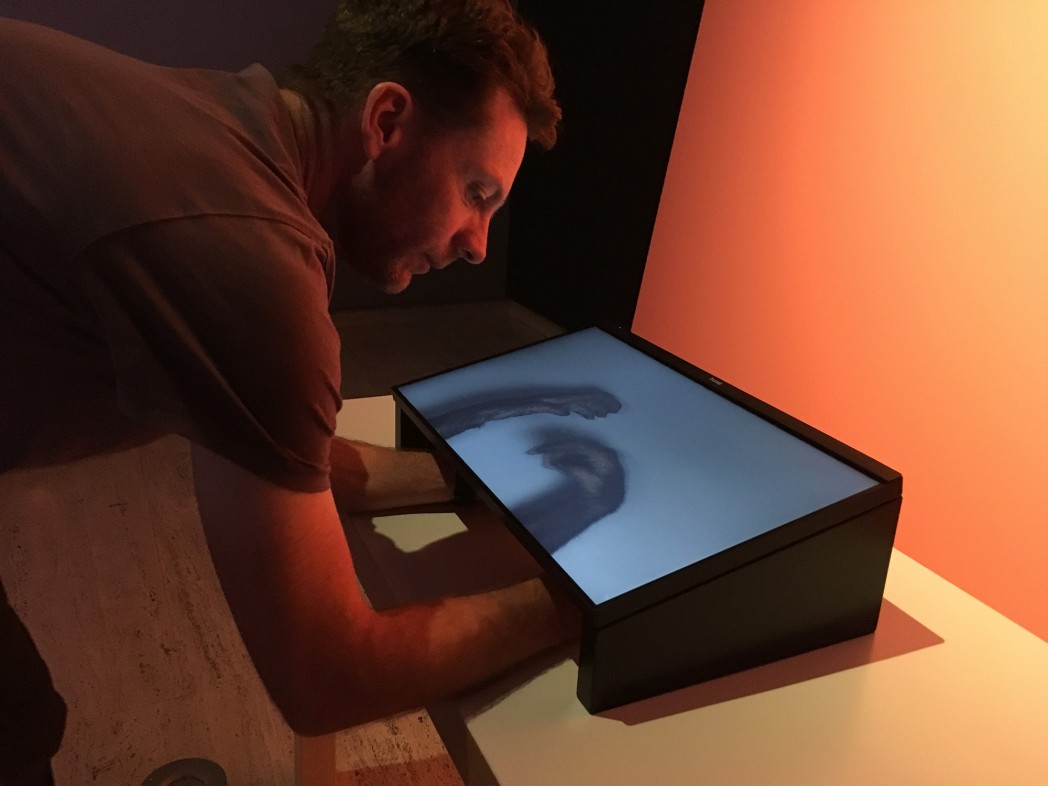 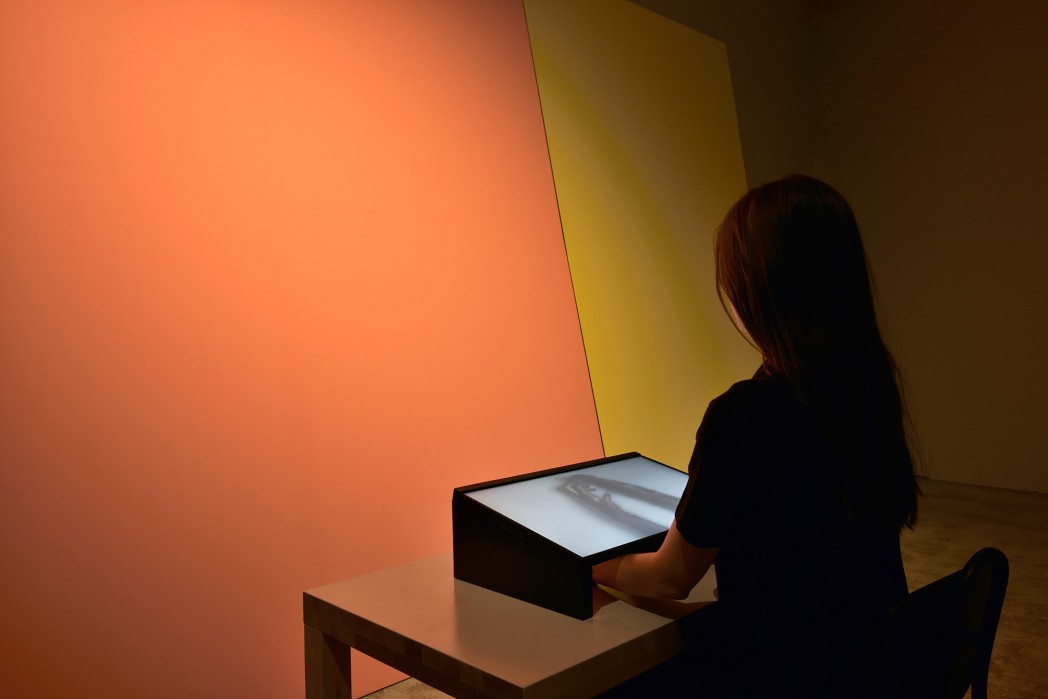 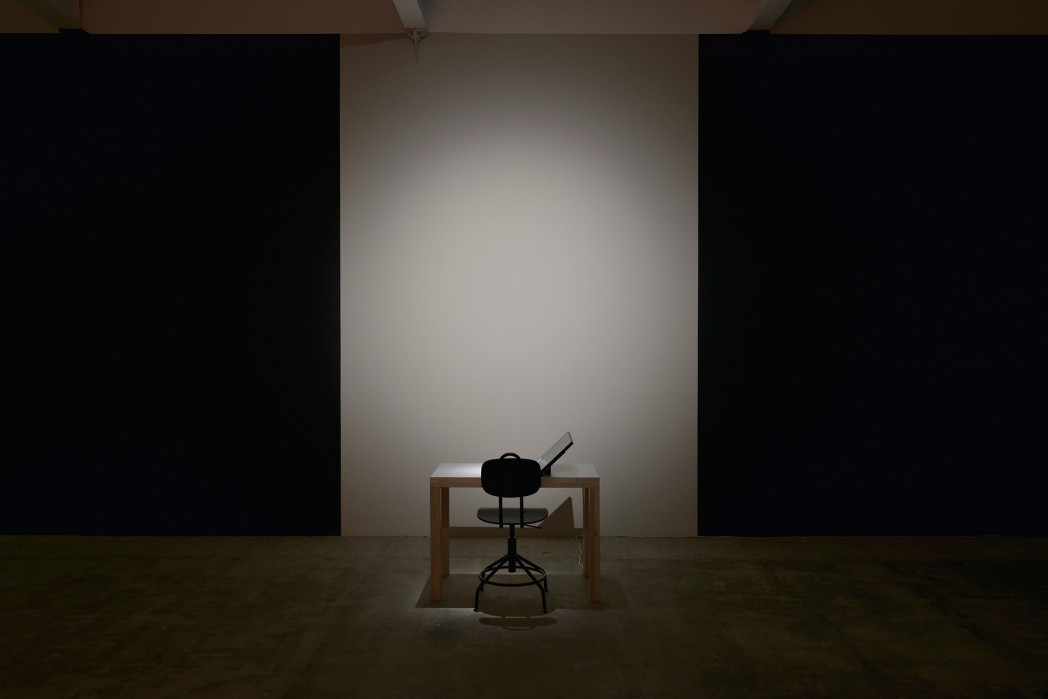 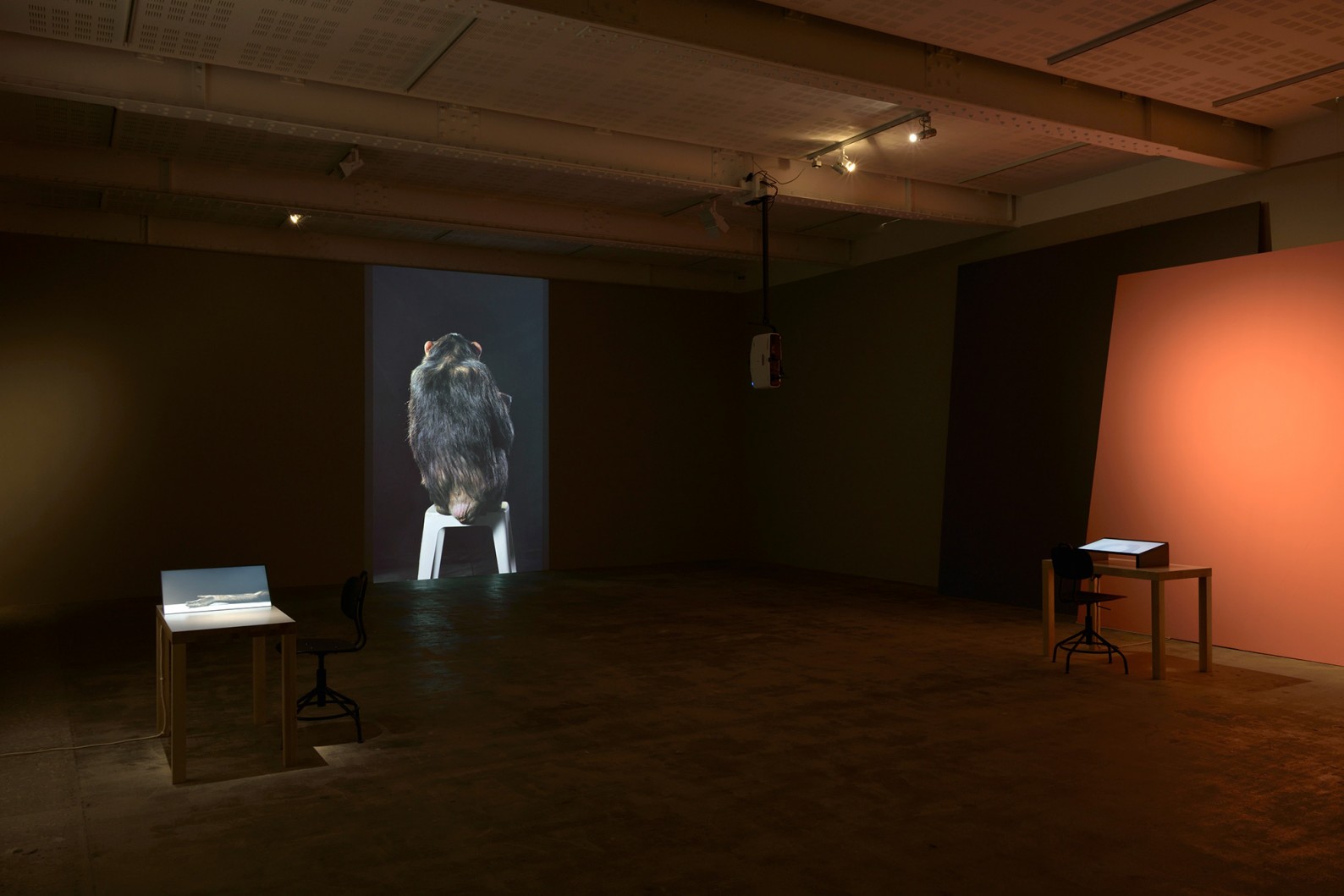 ‘The human’ is achieved by escaping or repressing not just its animal origins in nature, the biological, and the evolutionary, but more generally by transcending the bonds of materiality and embodiment altogether.”
Cary Wolfe, What is Posthumanism?, University of Minnesota Press, 2009.

”First part of the work combines the moving image with a sculptural aspect achieved by superimposing of twenty-two LED modules. Ahtila deliberately chose an out-of-date technology to make the image unclear and abstract when viewed up close, but intelligible from a certain distance. One can distinguish from afar a female human figure – mother – floating weightless in the Milky Way. As she comes near, she takes on monumental proportions and ends up gesturing silently toward the viewers as if to welcome them in good will.

Ahtila uses this giant, universal embrace to evoke the maternal bond linking two human being from the beginning of life and the point when love is born. This experience stirs the memory of archaic unity as well as nostalgia stemming from its disappearance. The artist believes that through this primal connection we are all imprinted with a paradoxical experience of fusion and otherness. The memory of unity reactivates the desire to recreate an equally intimate sense of proximity with other loved ones; this latent desire remains at the state of potentiality.

Ahtila takes this idea to an even more global dimension: what is humanity’s potential for empathy not only itself but also toward other species? Is our capacity for love limited, or can it encompass every living being? The artist invites us to reevaluate our own relationship to the environment, to its resources, and to the life that populates it.

The elements of the exhibition presented in the lower level of the gallery extend this reflection and offer an unsettling experience. An oversized projection in the back of the room shows a silent image of Jenny, a female chimpanzee, seen from the back as she sits on top of on a stool. She seems to pay no attention to the person watching her. She maintains privacy impervious to the human gaze even while she occasionally glances over her shoulder. Her composure, somewhere between modesty and aloofness, serves to underscore the position of the viewer who has now become a voyeur. This raises a series of questions about our own animality and whether alterity is built on an equal footing. Ahtila wonders: what are the driving forces behind the existing division between “us” and “them”?

Lastly, two sculptures offer an utterly novel experience. Ahtila relies on knowledge acquired through research in neuroscience and in therapies designed to relieve patients suffering from phantom limb pain. The strategy of these techniques is to fool our perception and our brains. Ahtila placed two monitors on wooden tables the way mirrors would be set up in a conventional therapeutic setting. At the first table, the viewer is seated in such a way that his or her right forearm is hidden by the monitor. The viewer’s left hand remains visible and may mimic the movements performed on the screen. At a certain point, one nearly ends up forgetting about the hidden limb, accepting the image on the monitor as a new reality, a kind of digital graft. The second table conjures up another experience by masking both our hands while our attention is focused exclusively on the image on the screen. Once again, there emerges an unlikely extension of the self that challenges the distinction between humans and animals.

Since 2005, Eija-Liisa Ahtila has been working on themes related to the issues of eco-cinema and ecological drama, that is, how to understand, create and mediate the world in light of global warming, the extinction of species, and exhaustion of natural resources.

Potentiality for Love is thus highly topical and refreshingly relevant. Without being prescriptive, the artist’s point of view firmly cuts across disciplines, questioning the place of humans in their natural, social, and geopolitical environment at a time when these themes ever more urgently demand a response.”