Synopsis – studies on the ecology of drama

“How to depict living things? How to approach them? How to convey a different way of being, another being's world? How to make it into a continuous event that becomes part of our idea of reality?”

STUDIES ON THE ECOLOGY OF DRAMA is a 26 min 26 sec film that uses the methods of presentation as a path to the company of other living beings. It expands upon the issues of ecological moving image narrative explored in Eija-Liisa Ahtila’s two previous works (The Annunciation 2010, Horizontal 2011) – the focus in this work being on presentation, imaging and imagination in the context of the moving image.

The work begins with a human actor walking into a forest park, where she introduces the themes of the work by conducting reduction exercises with the surroundings. Other performers in the work include a bush, a juniper tree, a common swift, a horse, a brimstone butterfly, and a group of human acrobats.

Making the ecology of drama visible requires the establishment of a reflexive distance and a representational dimension whereby the processes of technological recording and the expressive devices of the moving image can be made perceivable. One of the methods in this work is to use a form of expression that forefronts presentation, mediation as well as visual recording and its function in our reality.

The work employs the human body and its mimetic capacity as a tool to present the partial imaging between different creatures. The human body is used as a vehicle for bringing close that which is distant, for reinstating the experience of perception and understanding to the bodily framework, and for incorporating the image or figure of another being into the presentation. Becoming-alike, or imitation (mimicry), becomes an instrument for the representation of a living thing.

In her performance, the human actor-narrator makes use of the methods of the lecture-performance. Speaking directly to the viewer, she talks about the issues and themes of the ecology of drama and uses examples to eliminate expectations commonly associated with the environment in moving image narratives, thereby making room for other types of presentation.

For instance, she compares dramaturgy to composition in drawing, speculating about the dismissal of the hierarchy of creatures and elements in a pictorial representation. She challenges the idea of performing as a form of action by employing the Finnish word for acting, ‘näytellä’, which derives from the verb to show. This allows her to approach a different definition of performing, issues concerning imaging and becoming an image, and to expand the scope of possible performers and ways of performing.

The scene with the common swift illustrates a world of perception and experience that differs from human perception. This is done through the concepts of time and space and studies of the resolution of time and the effects of different sensory mechanisms on the conception of reality. By virtue of its manner of presentation, knowledge percolates into the humorous and touching atmosphere that runs through the work. A man turning somersaults on a trampoline in slow motion demonstrates for the viewer what the jumps might seem to a swift. This suggests to the viewer a way to approach the experience of a creature of another species.

The butterfly’s ability to undergo a complete metamorphosis is used as an example of the ability to change one’s viewpoint, of how one can view the world from a different perspective. In the scene that illustrates the metamorphosis, a group of acrobats gets into sleeping bags and climbs up into trees. As night falls, they lie inside the bags, using their body and various simple effects to illustrate the pupal stage of the butterfly. The human body can still be discerned through the green sleeping bags – the human form does not disappear – the point is to make the imitation or becoming-alike between species visible. The footage shows a simultaneous presence of two different creatures, a human and a butterfly in its cocoon, a performer and a performed. It makes visible a connection: a central aspect of the performance is to use mimicry to make another creature visible as a performer.

Our imagination brings us into a vital contact, in touch, with our environment, which we are also moulded by. Although we are limited by our senses, our imagination allows us to get a grasp on otherness, and by imitating its being, poses and gestures, make it part of our perception and understanding. To aid us in this, we have developed technical instruments to augment our senses. They enable us to come closer to the other and mark it as belonging to our reality.

The film poses a question: If our tool for approaching other beings (and thereby ourselves) is imagination, what could be the thing imagined, the fiction? Could we see fiction as a communicative force and an opener of the world?

In the final scene, as dusk falls, the acrobats use their bodies to create the figure of a star in a field. That simple human gesture and image is accompanied by the voice of the narrator who, inspired by the light of a star shining on the firmament, reflects upon the relationship between image and reality.

“The trace of light left by a star is like a projection on a screen – a reflected, immaterial image that nevertheless radiates a force that affects our reality. We necessarily imagine life – and the images we see play with existence and time.” 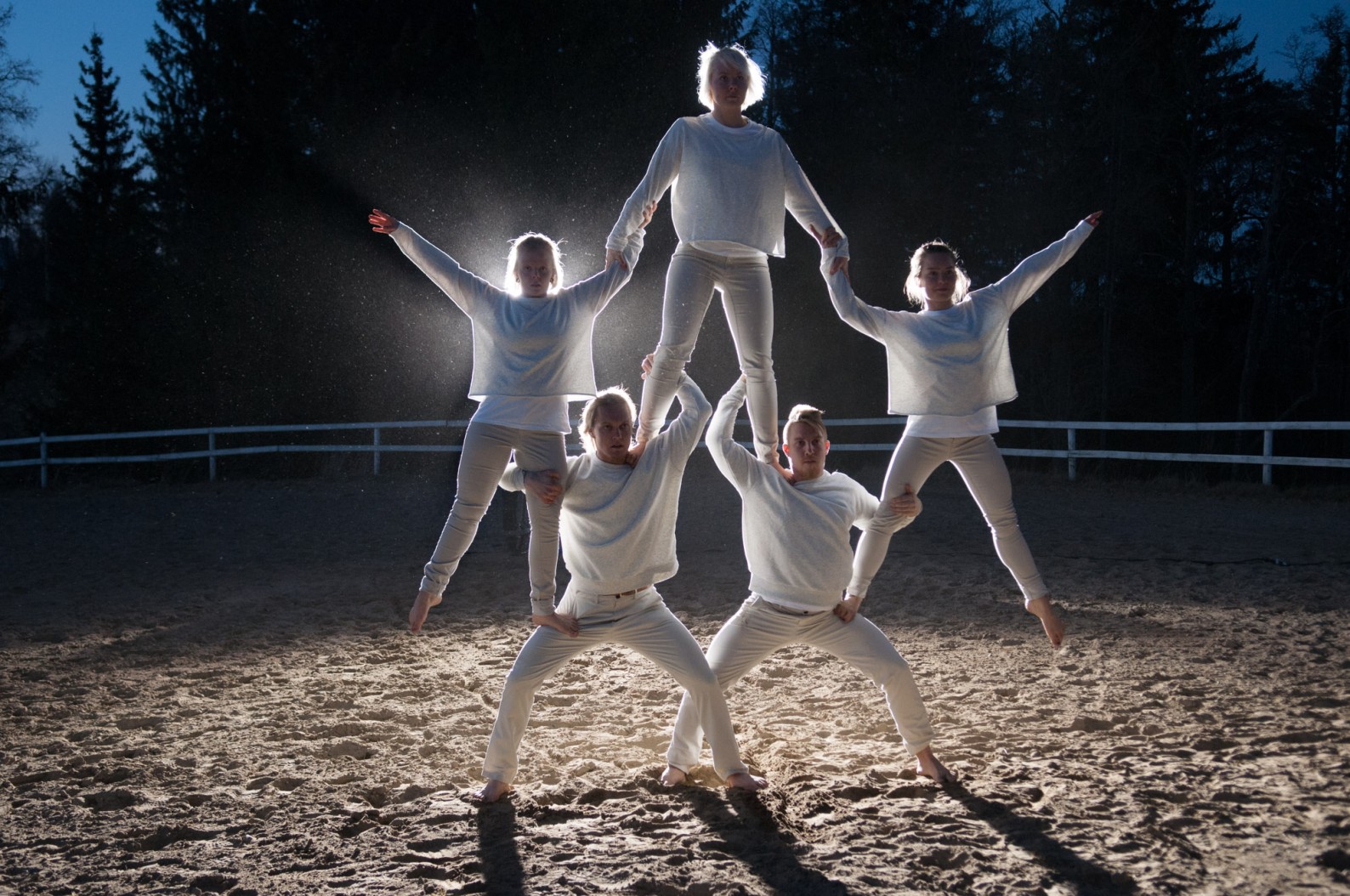